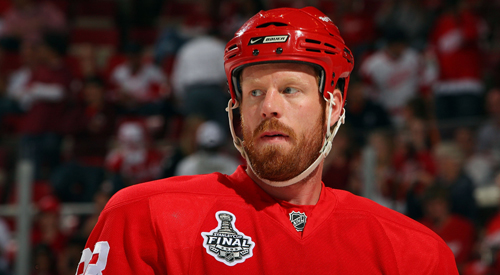 Every playoff round is different – even in the same sport. With hockey, one year incredible goaltending steals the show, hot snipers another.

Through it all though, themes almost habitually tend to transcend time and emerge once the smoke has cleared. One of those constants is the killer instinct that possesses both the Hollywood stud and the fourth-line grinder, in hopes of advancing one step closer to the Stanley Cup.

The first-round of the 2011 edition of the post-season provided an unheralded four Game 7 battles as well as 1297 total penalty minutes, 829 total blocked shots and 26 road wins.

To celebrate such intrepid efforts, The Good Point has put together an All-Fearless Team for the first-round of competition:

At the forward position, the men chosen for the All-Fearless squad are sturdy yet versatile, plucky yet opportunistic.

Johan Franzen, the 6’3″ 222-pound Swede now familiar with the phrase “leave it all on the ice”, is certainly deserving of a spot up front. In the Wings’ Game 2 victory over the Coyotes, the 31-year-old was obliterated by Shane Doan, resulting in 23 stitches. The Mule never missed a step, as he was back on the ice a period later and eventually put one past Ilya Bryzgalov in Game 3. In his career, Franzen is nearly a point-per-game producer in the playoffs while managing a pedestrian 0.55 points per regular season match. Considering the amount of blood and sweat he’s shed over the years, it’s not far off to assume he lives for spring hockey.

Joining Franzen is Tampa Bay speedster Martin St. Louis. After a 99-point campaign prior to the Lightning’s face-off with the Penguins in Round 1, St. Louis revelled under the pressure of guiding his team to their first series win since they took the cake back in 2004. His greatest accomplishment in the round of 16 wasn’t his eight points in seven games or three power-play markers. Instead, the time he spent enduring root canal surgery just hours after winning Game 1 showed the hockey world St. Louis’ courageous pedigree. High sticks apparently can’t slow down the 35-year-old vet.

Ryane Clowe, the lone Newfoundlander to crack the All-Fearless roster, is worthy of the final forward spot due to his diversity. His four tallies in six games don’t particularly stand out, but when you also consider his three helpers, plus-two rating, eight penalty minutes, 21 thunderous hits and 16 shots, he’s an overall stand out of the first round. Clowe is doing all the little things right for the San Jose Sharks, just like his idol Claude Lemieux did in the 1990s. Whether it is consistently fore-checking against one of the league’s most elite defenseman, Drew Doughty, or setting up Joe Pavelski for the Game 1 winner, the former 175st overall selection is guiding his Sharks to victory in every way possible.

The rear-guards chosen to patrol the defensive zone for the All-Fearless team are as steadfast as they are resilient.

Dropping and throwing his body around on the back-end is Eric Brewer, a 13-year NHL veteran hungry for his first opportunity to play in the Stanley Cup Finals. With the Lightning’s first-round series against the Penguins under wraps, Brewer sports a playoffs-leading 27 blocked shots, which look nice alongside 19 body checks. To boot, he leads all of his teammates in ice time with 25:43 per game. He’s producing offense on the road as well, compiling four of his five points while away from St. Pete’s Times Forum. Don’t be surprised if the 6’3″, 220-pound Brewer continues to sacrifice it all for the greater good.

When you’re on the ice just as much as Zdeno Chara, you’re doing something right. This is the case for Dennis Seidenberg, the Bruins’ unsung hero of the first-round who is managing to temporarily sneak out of Big Z’s shadow. His 19 hits and 21 blocked secured his move up to the first pair and into fourth-place among all post-season NHLers in ice time with 27:50 per game. His head coach Claude Julien told NESN that “the bigger the game, the bigger he plays”. This sentiment is ringing true thus far and he shows no signs of slowing down.

The All-Fearless’ netminder thrives under the microscope and rises to every challenge.

Keeping the All-Fearless respected, both on and off the ice, is Ryan Miller. Although not the official captain of the Buffalo Sabres, the East Lansing, Michigan-born stopper acts like it. By standing up for his club through the media during a war of words with the Flyers, Miller displays that he’s not just a franchise goaltender when play is underway. At the same time, he does his fair share in between the pipes. He faced the second most shots in Round 1 with 242.