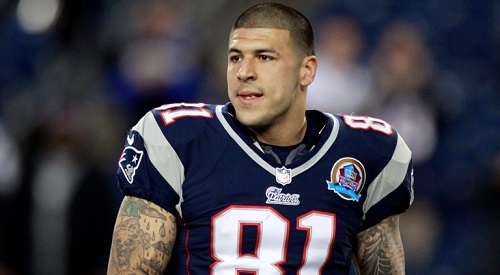 The Muddy Waters of New England

Just what in the hell is happening in New England this offseason? The team remains in the news week after week after week, which is quite unlike the organization. If I write so often about the team these months (i.e. seriously, three out of my past four columns), it’s at least half because there’s been constantly more fuel added to the fire.

Every year prior to this one, the offseason in New England would follow a similar script. Bill Belichick would sign a mercurial player or two (read: Albert Haynesworth or Chad Ochocinco/Johnson), but that’s all anyone heard of the team – the signing would make one news cycle, or two, and the media would move on. Only in 2013, that’s not what has happened, and it’s because there’s always been more.

Let’s have a quick recap. First, there was the curious decision to let go of beloved and Patriots icon Wes Welker for a player very much like him in stature, if not in on-field successes, in the person of Danny Amendola. There’s also been the on-going Rob Gronkowski saga, the one where the star tight end has now undergone a fifth surgery – four to the forearm that he broke in November, and another to his back. Then, there was the signing of the most famous backup-to-the-backup quarterback in America, the savior himself Tim Tebow. The alleged stealing of Robert Kraft’s Super Bowl ring by Russian president Vladimir Putin immediately followed this signing.

Weird, unlikely and… so un-Patriots, right?

Most thought this would be the end, and that the calendar would turn to July, that the team would open its training camp, and that everyone could and would finally focus on football. Only, this has been a most unsual offseason in New England, and all of these previous narratives pale in comparison to the real prize that is the Aaron Hernandez story.

First, here are some apparent facts, courtesy of ESPN, while facts are still available – the circus will soon arrive to the Hernandez mansion, if it hasn’t already, and all bets are off once that happens. The body of 27-year-old Odin Lloyd is discovered on June 17 in an industrial park close to Hernandez’s residence. Lloyd is said to have been shot in the back of the head and that this is what killed him. The semi-pro football player was the boyfriend of the sister of Hernandez’s girlfriend, and there is surveillance footage of Hernandez, Lloyd and two other people together just a few hours before Lloyd’s death.

Since, authorities have searched the house of the 23-year-old Hernandez and an arrest warrant in his name for obstruction of justice has been, or may yet, be issued and served. That might be because the lawyer of the Patriots tight end apparently delivers Hernandez’s cellphone to the authorities – problem is, the phone is smashed to pieces. Not only that, but the home surveillance system at Hernandez’s is as well. The kicker? His house is cleaned on the same day that Lloyd is killed. (Charles P. Pierce, who wrote this excellent piece on the saga, thinks that this may just be coincidence and that the maid may have simply been scheduled for that day. I’d counter by saying that maybe, just maybe, the young man should have cancelled the maid visit that one time.)

A life has been lost and many others have been shook and, really, this is the only thing that truly matters here. If the excellent young tight end really is involved in any way in the death of Odin Lloyd, then he must absolutely answer for it. In life, many, many things are more important than NFL football, and this is a prime example. Hernandez signed a new and lucrative contract just last August, but he may have squandered it away already – his career totals of 175 receptions and 18 touchdowns may well be etched in stone if the worst-case scenario unfolds.

The loss of Hernandez for any amount of time next season would also push the Patriots’s depth at the tight end position to the forefront of the news cycle. Belichick currently has seven tight ends (i.e. including Hernandez and Gronkowski), and this depth might be tested. The key may well be Jake Ballard, an ex-member of the New York Giants who always seemed to come up big against this same New England organization.

Some will wonder too if, maybe, the moment is right for a rededication to building -some would add, winning with -a strong defensive unit. The Patriots haven’t won anything since letting Tom Brady do, essentially, what he wanted on the football field about six years ago, some might say. New England won three Super Bowl titles in four years with the right mix between offense and defense, but nothing since everything has come to depend on the offense and Brady excellence.

Is that a sign that Brady isn’t quite as good as what he’s billed? Well, I think that’s laughable, but I suppose that many can think that if they want. The reality is that the three Super Bowls were close and contested to the end, as were the team’s two subsequent losses at the final game of the postseason. Close games tend to balance out over time, and this is what has happened with Brady. “A game of inches”, dixit Al Pacino in Any Given Sunday, right?

The events of this offseason, and New England’s tight end problem, prove that sometimes maybe there is some kernel of truth when a player falls in the draft. Let’s remind everyone, here, that Gronkowski was selected in the second round of the 2010 draft because of scares over his long-term health. Meanwhile, Hernandez was selected in that same draft, in the fourth round due to concerns over his character. In both cases, were those concerns a sign of things to come, or simply coincidence? It’s all just fodder for thought.

Is this the end of the Patriot Way? If the Tebow signing is as inconsequential as I anticipate it will be, if Gronkowski misses a season due to, oh, an 18th surgery on his forearm, and if Hernandez gets released and suspended by the NFL following the investigation of Odin Lloyd’s death, could this mean the end of the Patriot Way? That’s what every talking head will wonder then on television, just watch.