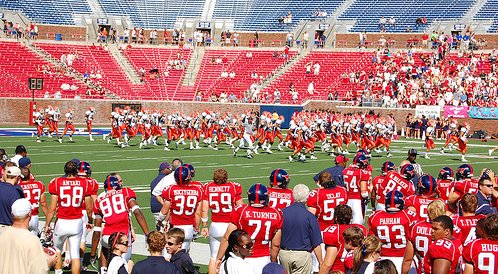 Mumme’s recent gigs have been with smaller schools such as Southeastern Louisiana, New Mexico State and McMurry University, but he’s well-known for his time with Kentucky and even more so for his crucial role in the design of the Air Raid, an offensive system that’s produced impressive results for the likes of Mike Leach, Ruffin McNeill and Dana Holgorsen. While Jones’ background is primarily in a different pass-heavy system, the well-known run and shoot, the two coaches told CBS’ Bruce Feldman their systems have the same crucial goal:

Jones: I think I climbed the coaching ladder quickly because I was willing to do it. I think (Mumme) got the coaching job at Kentucky because he had some balls. Nobody was doing it and he’s winning. All of a sudden you have these places that had never won and were looking for something different. They’d say, “We can’t win the old-fashioned way.” So I’m watching the variations of it and every coach has their own little something they put on. The correlation is you live by the pass and you get the run because you throw. Everybody else wants to run and get the pass because they run. With Hal, Mike (Leach) and I the big similarity is the philosophy, “Throw the football to get the run.” …

Schematically, though, there are some notable differences. As Chris Brown explored in an excellent Smart Football piece about the Air Raid’s history, its largest emphasis is on bringing Sid Gillman’s famed NFL idea of receivers threatening at different vertical depths to the college game:

When LaVell Edwards, head coach at BYU, decided that he wanted to throw the ball around, he and his offensive coordinator Doug Scovil looked to the NFL for inspiration. Scovil brought with him to BYU the core pass plays he’d learned there, which in fact were Sid Gillman’s core pass plays: vertical stretches, horizontal stretches, and man beating routes. These plays were almost not even plays at all, but concepts that serve as the building blocks of every passing offense. Gillman, decades earlier, had the simple insight that if properly allocated receivers across the field were stationed at varying depths with space between them, no zone defense could cover them.

Although the offense only has five potential receivers while the defense can drop seven, eight, or even nine men into coverage, if the offense can always threaten both vertically and underneath, the field is simply too large for a zone defense to cover a well orchestrated passing attack. And if zone defenses could not stop such passing, then passing concepts could be constructed to also defeat the inevitable man coverage they’d face through the route choices that placed those receivers around the field. Defenses, in turn, would have to find ways to bring pressure to disrupt this design, and thus the cat-and-mouse game between offense and defense would continue on that basis. Gillman revolutionized offense, but Scovil and Edwards streamlined it so that college kids — and not professionals — could excel with Gillman’s pro-style concepts. The story of the Air Raid over the last twenty years is simply this story retold over and over again.

In practice, thanks to the evolving ideas of Mumme, Leach, Holgorsen and others, that’s resulted in Air Raid systems incorporating no-huddle plays, offensive linemen playing with gaps between them and line-of-scrimmage audibles in addition to the different vertical levels. Here’s a key Air Raid play diagrammed and explained by Brown, the Mesh:

No play is more synonymous with the Air Raid than the “mesh” concept, which was directly taken from the old BYU offense. The name of the play refers to the two receivers, Y and X, who run shallow crosses in opposite directions. The rule is that the Y “sets the depth of the mesh,” meaning he works to about six yards deep, while it is X’s job to come directly underneath him — in practice they begin by touching hands as they run by — to ensure there is no space between them. It is, at core, a “rub” route, known more derisively by defensive players and coaches as a “pick” play. It’s not illegal because the receivers do not actually seek to pick defenders but instead simply get on their paths and run by each other, forcing defenders to go around them. Meanwhile, the running backs both check-release — meaning they look for potential blitzers — and then release quickly to the flats.

The key innovation from Mumme on the play was to change Z’s route from a post, which is what it was in the old BYU system, to a corner route. This transforms the play into a triangle read on the frontside, with the corner, X on the shallow and F in the flat creating the triangle, which puts both a high/low and a horizontal stretch on a zone defense. Further, the corner route had some ability to adjust: against man defenses and in the red zone, it was a true corner route run at 45 degrees and to the pylon, thrown with arc. Against a soft corner the receiver bent it flat underneath the dropping defender, so it become more of a true out route. At all turns, the theory was for the quarterback and receiver to simply find the “open grass”.

The run and shoot, which was originally devised by Tiger Ellison and adapted into a more passing-focused system by Mouse Davis (who Jones worked with in 1982 with the CFL’s Toronto Argonauts), carries some of the same components as the Air Raid. However, its key focus is receivers making reads and adapting their routes on the fly. While the old four wide receiver/one running back form of the run-and-shoot used in the NFL in the early 1990s has largely disappeared, mostly thanks to the zone blitz, the philosophy of receivers changing their routes on the fly remains important throughout many passing-focused systems, including the Air Raid. As Jones told Feldman, that was a key run and shoot innovation that’s an essential part of his and Mumme’s shared offensive philosophy:

The concept of reading the coverage, nobody did it. Even when I was a player in 1977, and every Monday they’d say look at the next team and tell us what you think will work. Well, I’d write a book on reading and how to read the routes and all that stuff. But nobody in the NFL back then allowed their receivers to read coverage. If you’re running a curl, you’re running a curl. That was it. There was no conversion.

Our belief is, give the kids as much as you can and give them a basis for why to do a certain thing and then let them make decisions on the run. I think that concept from what Hal did is what Mouse (Davis) did and what I’ve copied. Let the kids have freedom to do what the best thing to get open is, and that gets back to what (Mumme) said about the Air Raid. It’s an attitude, a belief system. And once you get the belief in the kids, you win.

As Brown wrote at Grantland in 2012, those run and shoot concepts have been passed on into modern NFL systems, including that of the New York Giants:

The run-and-shoot never left. No, I’m not talking about the increased use of multiple receiver sets or the emphasis on passing in this year’s NFL. Both trends exist, but they aren’t necessarily tied to the ‘shoot. Instead, I’m referring to the famous route packages that Mouse Davis invented and every ‘shoot team since has used: “streak,” “switch,” “go,”Choice, and so on. What made the ‘shoot special — and truly explosive — was that it was backyard football writ to the NFL. Instead of the traditional pro football approach, where a team might have hundreds of pass plays, each with multiple variations, that the quarterbacks and receivers were all required to practice and memorize, the run-and-shoot was simple. …

A perfect example of Cruz excelling in a run-and-shoot play this season came in Week 3 against the Eagles. On third-and-2, Gilbride called an old staple — the “switch” concept. At the snap, the inside receiver, Cruz, and the outside receiver, Hakeem Nicks, were to “switch” their releases by crisscrossing past each other. But that’s just where the fun begins. Each receiver still had multiple decisions to make. Nicks’ job was to run an inside “seam read” route. Depending on how the defense played him, Nicks might go vertical or he might break across the field. Cruz’s first responsibility was to get deep, but if the defense played him over the top to take away the deep ball, his job was to stop and look for a pass in the open space. On the play, the Eagles blitzed and Cruz found an open spot in the defense and waited. Manning found him, and 74 yards and several broken tackles later, the Giants had a touchdown.

The adaptation of run-and-shoot principles into the current Giants’ offensive system demonstrates that even offensive systems once written off as dead still can have important impacts on the modern game. Similarly, although Jones and Mumme made their name with different offensive systems, both embrace a variety of similar concepts, and they’ve both tweaked and altered their approaches over the years to incorporate new ideas. What really makes this seem like a good combination is the reputation of both men as people willing to take what others have come up with and add further innovations to make it something new, though. That suggests they’re always looking to improve, and that the different insights and backgrounds both bring can be welded into a cohesive system. If that happens, the rest of the American Athletic Conference should watch out.