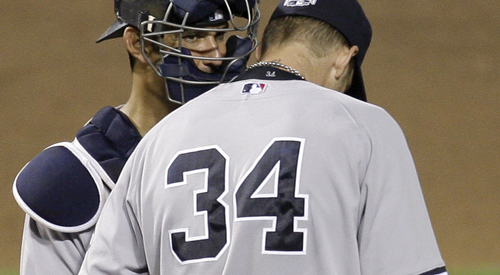 Your time with the Blue Jays will always remain a mystery.

I guess it all has to do with your potential.
That was the word the experts used to describe you:
Potential

The conspiracy theories about you will always come up.
But a more proper term would be irony.
It was ironic that you had your best season,
the same year you could opt out of your contract

We all finally learned to love you in ’08.
No one cared about the bad start or the sarcastic tip-of-the-cap,
or your poor choice to use “Hanging Tough” as your official song.
There was never a mention of your first two seasons and the injuries.
But you left us for New York: The ultimate stress test

Tell us what it’s like to play for New York.
Does the owner mind the tattoos?
And would you ever say something like,
“We played scared. We managed scared. We coached scared,” in New York?

Maybe it was all for the best.
Your departure gave Richmond, Romero, Cecil, Tallet and Ray an opportunity to prove themselves.
A minor benefit, but a benefit nonetheless.