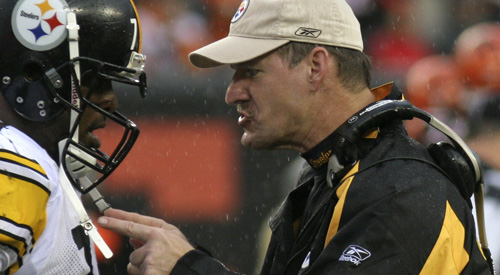 A long-standing annual NFL tradition continued on Monday, December 29th, 2008. On the day following the conclusion of the latest season, unsuccessful coaches found themselves among the ranks of the unemployed. Cleveland Browns coach Romeo Crennel, Detroit Lions bench boss Rod Marinelli, and, surprisingly, the New York Jets’ Eric Mangini were the first three victims to feel the ax. One person immediately became a popular candidate for all three vacancies.

For nearly two full seasons, the best available free agent coach has undoubtedly been Bill Cowher, he of the inimitable scowl. The man is a legend in Pittsburgh, where he led the Steelers to their fifth championship with a win in Super Bowl XL. The Pennsylvania native spent 15 years coaching in Steel City, making 10 playoff appearances (eight of which were as divisional champs), going to two Super Bowls, and walking out with one Lombardi Trophy. Though not every season of his tenure was considered a success, Cowher more often than not paid back the loyalty given to him by the Rooney family, the owners of the Steelers. Over the 38-year stretch from 1969-2006, the Steelers had only two head coaches: Cowher and Hall of Fame inductee Chuck Noll, whose four Super Bowl wins are the most by any one coach. Though many consider the loyalty presented by the Rooneys excessive, Cowher and Noll’s records generally prove the opposite. Cowher left the Steelers for the broadcast studio at the end of the 2006 season, though he did not rule out an eventual comeback to the sidelines.

Needless to say, many teams were hopeful that two years off had been enough for Cowher. After firing Crennel, the Browns immediately went in Bill’s direction, but their hopes to sway the former head coach of one of their chief rivals to the shores of Lake Erie were quickly dashed. The Jets, who took a huge gamble by dismissing the very talented Mangini, remained in the picture for a slightly longer span of time, though they were also turned down only a day later.

A third candidate, however, was much more intriguing. The Denver Broncos, after narrowly missing out on an AFC West championship, bid adieu to their own legendary mentor, Mike Shanahan. Cowher’s status as the best free agent coach finally had another suitor. Meanwhile, the Broncos sought to replace a legend with another legend, immediately attempting to woo Cowher.

Though the man has undoubtedly had great success in the NFL, any team coming after Cowher was likely setting themselves up for more disappointment. The Bill Cowher of recent years has not been nearly as consistent as many seem to think, and is surely no longer an antidote to a troubled team. While he certainly turned the Steelers around in 1992, getting them six straight playoff appearances after Noll only earned them one in his last seven seasons, Noll’s final teams were consistently on the cusp of cracking the bracket, with Cowher simply providing a talented roster that final push. After that six-year stretch, Cowher’s teams missed the playoffs more often than they made them, with two of their three latest playoff losses occurring on home turf. Even the Steelers’ one Super Bowl win under Cowher was a lackluster performance against an anemic Seattle Seahawks club.

On January 4th, less than a week after the annual firing day, Cowher announced on television that he’d be staying put in the studio for at least another year. It may be for the best. As Atlanta’s Mike Smith and Miami’s Tony Sparano proved this year, new coaches can turn teams around immediately. Bill Cowher, however, does not appear to be that coach.