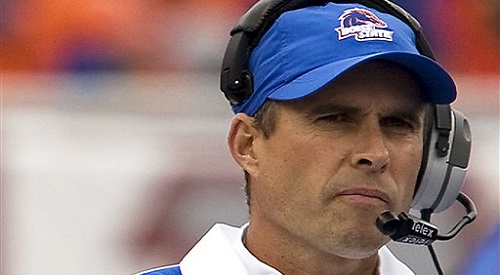 Pray and pray for my downfall

Well, not quite. The Broncos finished the 2012 season with an 11-2 record after a tight 28-26 win in the MAACO Las Vegas bowl against the Washington Huskies. This win is the third Las Vegas bowl win in a row for Boise State, but this one is probably a little sweeter than the last two.

In the past two seasons, the Broncos won the Las Vegas in convincing fashion but had been deserving of a bigger prize. In 2010 and again in 2011, the team was among the five best in the country, yet missed out on the big dance because they couldn’t win every game on its schedule – even though just about nobody else had. The Boise field goal kicker missed a chip shot in Reno, Nevada in 2010, then another one on The Blue against the Texas Christian University (TCU) Horned Frogs the following season, dashing the Broncos’ dreams each time. Because of two defeats; the first by three points and the next by one, Boise State wasn’t invited to the big boy dance. That’s harsh, but did anyone ever say that the BCS was equitable or morally defensible?

Entering the 2012 season, plenty of questions surrounded the Broncos. For one, how would the team fare with new starting quarterback Joe Southwick, who had the unenviable task of replacing The Artist Kellen Moore? Well, Joe Southwick probably exceeded expectations for someone named Joe Southwick, which is to say that he was pretty good. Then, how would the Broncos perform on defense? The team had lost Shea McClellin to the draft as well as just about every other starter on the defensive side, but it turns out that the uncertainty was all for naught. Finally, how would the team’s ultimate black sheep–its kicking game–perform?

All of us should have known better, really. Chris Petersen remains in Boise, Idaho, and the Broncos will be fine as long as he does. Again, the expectations were tame entering the season. The team was ranked No. 24, but it seemed like an empty 24 considering how many players on offense and defense had to be replaced. Then the Broncos started playing and the expectations became completely extinct when the team, at long last after so many wins, lost a big game. In East Lansing, the Broncos lost an ugly 17-13 game to No. 13 Michigan State where they looked as listless as anyone thought they might. Just like that, the Broncos’ season was over, even though it hadn’t even really started yet.

That’s when Petersen went to work.

He replaced Doug Martin, a running back who just might be in the running for this season’s NFL Rookie of the Year Award, with D.J. Harper, a sixth-year senior who suffered through not one, but two ACL injuries. That Harper rushed for 1,137 yards on the season is a testament to his character and the type of determination he has.

The ultimate task, however, was to replace the all-time winningest quarterback in NCAA history in Kellen Moore and because Petersen knew no one ever could, he didn’t ask Southwick to replicate what Moore accomplished. Southwick was allowed to do Southwickian things, which included that rough outing in the season opener against Michigan State. He was adequate, and next year should be better for him. Then Petersen had to rebuild his defensive unit, especially one that was now without a dominant defensive line. Players like Demarcus Lawrence and Sam Ukwuachu helped, but mostly the coach turned to his secondary and built it into one of the country’s best. After being the sore spot a year ago, this unit allowed only four touchdowns all season long.

Finally, Petersen preached a “hope-for-the-best” approach with the kicking game as he usually does – only this year, well, the best actually happened. That is, the Broncos actually had a kicking game worthy of the name this season. Or maybe it just seemed that way, as it was the kicking game that saved the bowl win this season. Down 26-25 and with roughly a minute left to play, it was the shortest player on the team, senior Michael Frisina and his 5’5”, 162-pound frame who came up biggest with a 27-yard field goal that beat Washington.

But really, that’s the rub for Boise State fans. This kicking game that has caused so much torment recently was the one saving the team this time around, when it truly didn’t matter.

Off the field, things remain the same for the Broncos. In their ongoing quest to legitimize themselves, Boise State still hasn’t officially left the Mountain West Conference for the Big East – and they may never do it. Always, the team must look for the best possible option; the one that makes it look the best in the eyes of writers, opponents, coaches, pollsters and so on. But this quest might finally be over.