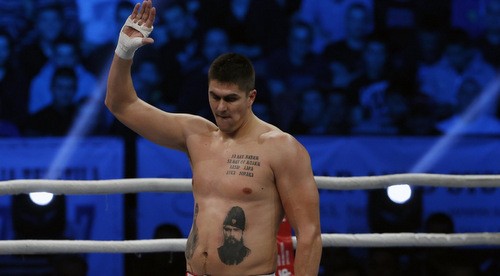 The Political Afterlife of Darko Milicic

Darko Milicic is a memorable personality for reasons other than being one of the least productive second overall draft picks in NBA history. He’s always been a little bit more bold and more brash than we’d expect a bust to be. Imagine if we watched Kwame Brown rip his jersey apart in the middle of a game or Michael Olowakandi unload on an international officiating team in a profanity-laced tirade.

But that’s just it, we can forgive Olowokandi for not being Tim Duncan and come to terms with Brown’s disappointing career because neither ever resisted the tidal influence of North American culture that inherently obscures any expectations we ever had of them. Milicic was never like Olowokandi or Brown because Milicic never went quietly.

“I thought [Larry Brown stalled my development]. I was supposed to get a chance in Detroit, but I didn’t,” Milicic told the NY Daily News back in 2007. “He was supposed to give me a chance to see what I could do, but he didn’t. All I was expecting was a chance if nothing else, but it didn’t happen and now I’m here [in Orlando] and I’m happy.”

Milicic was an arrogant disappointment at best and a misused underdog at worst (or at least he would have been had he not come across as wholly unlikable).

When he finally did retire at the age of 28 (to pursue the spoils of professional carp fishing, no less), the majority of the sports writing community said good riddance and moved on. There was no sense of sympathy for a man who no doubt had the tools to succeed but never got a consistent opportunity, the media didn’t justify his wasted career on the notion that he faced too much pressure too soon, it just washed its hands of him and went back to using him as a punchline.

Say what you will about Milicic’s playing career (or lack there of), there’s no denying that Milicic is still the same polarizing figure he’s always been. Never afraid to speak out and never afraid to wander back into the spotlight, Milicic has most recently begun a career as a professional kick boxer. He lost his first early on account of having to forfeit in the second round due to a leg wound.

More interesting than Milicic’s strategy in the ring, however, are the prominent tattoos adorning his stomach. The ink is unmistakably significant, and immediately stood out as more of a statement  than anything else, especially combined with the fact that he took the ring with a t-shirt that said “Cetnici Srbija” on it – which translates to “Serbian Chetniks”. A pair of Russian websites (24Sata.rs and Telegraf.rs) shed light on what the tattoos might mean – you’re going to need Google Translate for those.

On Milicic’s right is the visage of Nikola Kalabic, on his left the likeness of Momcilo Dujic. Both are political figures that any student of Serbian history will no doubt be familiar with.

ACCORDING TO SEVERAL RUSSIAN WEBSITES, MILICIC’S TATTOOS ARE OF NIKOLA KALABIC (HIS RIGHT) AND MOMCILO DUJIC (HIS LEFT).

An athlete’s political perspective isn’t necessarily news, but in this case – coupled with the fact that just last year he served as the guest of the Serbian Radical Party at a rally in support of the release of alleged war criminal Vojislav Seselj. It’s no secret that one man’s war criminal is another man’s hero – the sports writing community obviously being one of the least qualified to determine which. If nothing else, Seselj has issued violent statements condemned by the Human Rights Watch, which is nothing to scoff at.

To put Seselj and the Serbian Radical Party in context one need do their fair share of studying, but a layman basketball fan may well be satisfied with what can be gleaned from ESPN’s 30 for 30 documentary about the former Yugoslavian national team called Once Brothers (it’s available on Netflix). Long story short, what once was one country – Yugoslavia – is now multiple, including Serbia (in which Vlade Divac was born) and Croatia (home of the late Drazen Petrovic).  Divac, Petrovic and Dino Radja are featured prominently in the film.

A BBC article from 2007 explains why Milicic’s public alignment with Seselj and the Serbian Radical Party is relevant to those with an interest in the geopolitical history of the area.

“The Radicals’ leader, Vojislav Seselj, is in The Hague, awaiting trial for war crimes, inciting mass murder and torture. Mr Seselj has the unusual distinction of being accused of unacceptable brutality by one Slobodan Milosevic, who said he was ‘the personification of violence and primitivism’. Not nice to have on your CV. But the Radicals were once in government with Milosevic and sell his picture at their rallies.

The Radicals believe in a Greater Serbia, although they don’t say how they would keep Kosovo, let alone get Croatia back. Their rallies abound with men with shaven heads, sporting a variety of military headgear and belting out nationalist songs with great gusto.”

To this day Seselj awaits the resolution of his trial but he was temporarily released from prison while recovering from cancer last November.

There’s no denying that, for the greater part of the past century, the area which was once Yugoslavia has been a hotbed of political discussion. A more qualified individual than I – a journalist who spends half his time coding a fantasy basketball website – would be able to provide more context, but even at the surface Milicic’s involvement in this movement is interesting.

The Serbian Chetniks t-shirt, which Milicic was seen entering the ring in, comes with its own set of connotations.

Darko Milicic made his kick boxing debut in a t-shirt supporting the Serbian Chetniks.

According to the Encyclopedia Britannica, Chetniks were “members of a Serbian nationalist guerrilla force that formed during World War II to resist the Axis invaders and Croatian collaborators but that primarily fought a civil war against the Yugoslav communist guerrillas, the Partisans”. More recently the term was revived in the early 1990s, right around when Yugoslavia split, to refer to a group of paramilitary forces that fight for the Serbian nationalist cause.

Back in the 1940s, a division of the Chetniks headed up by the aforementioned Momcilo Dujic (a.k.a. Milicic’s left oblique) proposed a plan for a Greater Serbia, a reframing of an age-old expansionist ideology that came to the forefront all over again at a time when tensions were high just prior to the civil war in the area. A fascinating NY Times Magazine article from the eve of the collapse back in 1991 is worth any party interested in the controversial Greater Serbia concept’s time.

In short, the concept of a Greater Serbia means a Serbia in which all Serbs are accounted for – even those which reside in modern day Croatia (a sentiment the majority of Croatians naturally oppose). Anxious to establish this Greater Serbia are Serbian nationalists and Chetniks. Their pursuit of the cause has ebbed and flowed over the years and their contributing role in the bloody Croatian War of Independence (in which over 20,000 were killed) is unquestioned. These days the area is a relatively stable one as younger generations opt out of the animosity and ill-will historically ingrained in their respective cultural mentalities but it’s not as if the violent chapters never existed.

That peace and stability is what makes Milicic’s public statements in the form of how he presents himself in the kick boxing ring so curious. It’s one thing to rep a brand or movement as a professional athlete, it’s something else entirely to make a highly visible appearance sporting a t-shirt and tattoos which pay homage to an organization so traditionally affiliated with civil unrest. While Milicic’s Serbian Chetnik t-shirt is self-explanatory, both Dujic and Nikola Kalabic (a.k.a. Milicic’s right oblique) are directly linked to the WWII Era Chetnik movment, the latter being a famous commander during the war.

What the athlete’s intention is and just how much he plans to involve himself in national politics remains to be seen.

Unless there’s much more to this story, there’s no reason to believe that Milicic, a retired basketball player-turned-kick boxer, is anything more than a celebrity with a political affiliation, but his commitment to stating his opinion falls right in line with what North America grew to dislike about him. He never slunk into the shadows and apologized for failing to live up to the otherworldly hype that surrounded him, no matter how much the sports community tried to force him to.

There’s no reason to condemn the man or infer any more than that he has an interest in national history or patriotic solidarity, but one doesn’t go out and get a contentious tattoo on a prominent body part prior to participating in a shirtless sport if they’re hesitant to join the conversation. It just so happens that the particular conversation is loaded with hot button issues to which many are still justifiably sensitive.

It’s 2015 and Darko Milicic may be far from the basketball court, but that doesn’t mean he isn’t still the same unapologetic antagonist he’s always been.