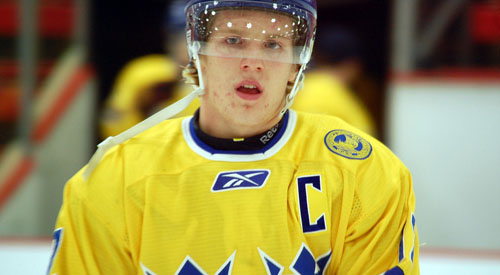 Gabriel Landeskog, from Sweden to the NHL Draft

Living 3982 miles away from your family can take a toll on a teenager and their family.

That’s not the case for sharp-shooting Gabriel Landeskog and his family back home in Stockholm, Sweden, nor has it ever been ever since he left home at age 16 to suit up for the Kitchener Rangers of the Ontario Hockey League. Perhaps it was his father who made it easy for the family. After all, Tony Landeskog is a former defenceman in the Swedish Elite League and was accustomed to the life of an athlete. Genes are powerful, and Tony’s fit Gabriel like a pair of Wranglers on a cowboy.

“[My family’s] been great, I can’t thank them enough for what they’ve done for me, allowing me to move [to Canada]. My mom wasn’t too happy about me moving when my dad and I brought it up,” said Landeskog. “At the same time she’s just happy for me and they’ve given me the chance to bring my dream over here. I can’t thank them enough for that and the support my whole family has given me over the years.”

Gabriel’s father may not be able to watch all of his son’s games in person, but that doesn’t stop him from bleeding the blue, red and white. Tony watches or listens online to the Rangers’ broadcasts while donning a Ranger jersey of his own. I’ve been reassured it’s the one with number 92 on the back.

“It’s definitely mine for sure. I wouldn’t be too happy if it was Ryan Murphy’s or someone else’s,” laughed Landeskog. “He streams the games and sometimes listens to the games online. He’s a bit of a fan that way […] There’s a lot of Ranger pride in him too.”

Tony didn’t just pass down his genes to Gabe on Nov. 23, 1992, Landeskog has a twin sister; something he says is pretty special.

“When we were younger we were kind of stuck to one another. In the same class and stuff, but after a while we went to different schools and we became normal siblings. Obviously still every time we talk, it’s always, ‘Hey twin how are you doing?’,” said Landeskog. “It’s special to have that kind of connection and we’ll always have that. She’s just a great sister and has always been supportive.” Landeskog got into hockey when he went with his father to one of his brother Adam’s practices. His brother wasn’t a fan, but Gabriel took immediate liking to the game that will likely turn into his career. He began playing when he was six years old and has been practising six days a week ever since.

So far in the 2010-11 season, all that practice has paid off in the stats columns as the 18-year-old has already managed 20 goals and 16 assists in just 24 games for the Rangers.

A bump in that road came last year, though, when Landeskog was cut from Sweden’s World Junior team. He took it as a form of motivation for the second half of last year and going into this year. “I think it was good for me to not always have the straight uphill career and to face adversity,” said Landeskog. “I learned a lot. This year, I know what I have to do to make that team. Hopefully I’ll make the team and have a good World Junior campaign. My focus right now is on Kitchener and hopefully, if I do well, the coaches will recognize that and give me a chance.”

He has some more inspiration. Last year, Landeskog roomed with former teammate-turned-Carolina Hurricane, Jeff Skinner, who was cut from Canada’s World Junior team. Skinner taught Landeskog a lot about how to handle himself like a professional off the ice. “It’s all about priorities. I treat my body like a racing car, I can’t fuel my race car with alcohol. If I treat it well, everything will work out for me,” said Landeskog. He added that it’s definitely a Porsche, as opposed to a Ferrari. If he continues his pace this season, he’ll be able to shift into cruise control and ride his Porsche right into one of the Top 5 picks in this year’s NHL Entry Level Draft. He assures me though that’s not something that he’s worried about.

“I’m not one of those guys at all that just wants to go first overall. I don’t want to put any pressure on myself by saying, ‘I want to go Top 5 or Top 10′. I’m just going to work hard every night and see where that takes me,” said Landeskog. “With the draft coming up the most important thing is to enjoy the moment. Hopefully a team picks you that believes in you and wants you to excel as hockey player and as a person.”

If the Porsche keeps the pedal to the metal, Landeskog’s father won’t have to stream his games online from just under 4000 miles away next year, he’ll just have to get the NHL package. And a new jersey of course.

Update: On Dec. 3, 2010 it was made official that Landeskog was named to Sweden’s U20 World Junior Hockey Championship team, making it the fourth time he’ll represent his country internationally. According to the Kitchener Rangers’ official website, due to his circumstances and the travel involved, Landeskog will forego tryouts with an automatic roster spot.