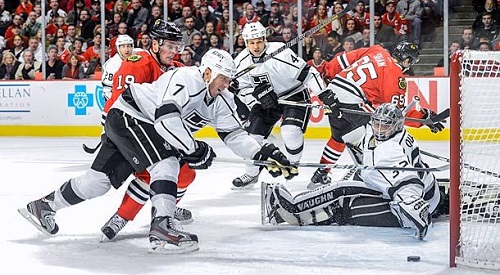 The Triumphant Return of Home Cooking

Whether it’s the typical grinding marathon or this year’s furious sprint, every point earned during the regular season is gained with the hope of not just making the playoffs, but securing home-ice advantage. The Presidents’ Trophy is valuable not because anyone truly cares who won the regular season, but because it ensures the ever so important home-ice advantage in every round of the playoffs. And just one year after collectively posting the worst home win percentage in the playoffs dating back to 1987 when the league switched to four seven-game series, teams in the Stanley Cup hunt this year are guarding their castles tighter than ever before.

Through Sunday night, the home team has won 52 of 74 games this postseason for a .704 win percentage, the first time since 1993 they have even cracked the .600 mark. Six of the 12 completed series have seen the home team lose no more than once and only one series, the Boston-Toronto battle in the first round, saw the visitors win more often, something that happened seven times last season.

Though every player and coach will talk about the importance of home ice, last year the home team’s win percentage was a measly .453 the visitors stunned the home crowd time and time again, especially Los Angeles (10-1 on the road) and Phoenix (5-2). This year however, the Kings didn’t have the luxury of playing as an eighth seed few expected to win and the rest of the league is up to the task of taking on the defending champions. They are only 1-7 on the road after the first two games in Chicago, though their 7-0 home record is a bit better than last year’s 6-3 mark.

That this season is such a high spike is pretty astounding, especially since home-ice advantage has lost its value in recent years. In seven of eight playoffs from 1988 to 1994, the home teams won 50 games or more and posted a collective .602 win percentage, going 363-240. The 50-win mark for home teams in the playoffs wouldn’t be reached again until 2004 and twice more in 2008 and 2009. But the past three years have been substandard with the teams in dark jerseys going 133-131 for a .504 win percentage.

The eras have changed and there are many reasons home ice isn’t as much of a benefit anymore, most notably the parity of the league. In the late 1980s there were only 21 teams in the NHL which means the sixth-worst team made it to the postseason every year. This allowed higher-seeded teams to beat up on most other teams, especially in the first round. There’s also the fact that every rink is made to the exact same specifications now whereas 20 years ago the advantage was not only in having the last change, but having a rink that other teams weren’t used to.

Jeff Z. Klein of The New York Times noted that last year when he covered the lack of home-ice advantage. Some were smaller than the 200 by 85-foot standard used today and others had the penalty boxes next to the home bench while the visitors’ bench was on the other side of the rink, allowing for faster changes in that critical time right after a period ends. Nearly all of the arenas in those years, 18 of 24 since 1993, are no longer used.

Coaches are working the matchups perfectly and a combination of getting the proper defensive assignments on the ice and allowing their scorers to escape tight-checking situations have led to home teams to score 210 goals while allowing 163 for a collective plus-47; the past three years combined, the home team is a minus-9.

Surprisingly, despite the high win percentage in these playoffs, there were two crucial home-ice losses as Anaheim and Washington both sent their fans home disappointed in Game 7 of the first round. The Capitals’ 5-0 is tied with Montreal’s 6-1 defeat at the hands of Ottawa in Game 5 of their series as the worst home setback, while 11 of the 22 losses have been by a single tally.

As the conference finals progress, it will be interesting to see if the trend holds true or if the numbers even out a little more. For Pittsburgh, dropping Game 1 could be huge as the Bruins have taken the advantage away from them. After losing two in a row to Toronto, the Bruins have won four in a row. Los Angeles has a good chance of tying the series as they’re riding an eight-game win streak at home dating back to last year’s Stanley Cup Final and were able to even out their series against St. Louis in the first round by winning Games 3 and 4 at home.

Pittsburgh, Boston, Chicago and Los Angeles all worked hard during the regular season to ensure they could get as much of an advantage as possible in the playoffs. To ensure that effort doesn’t go to waste and they get a chance to move on, they must continue to defend their rink and their city as ruthlessly as the first two rounds.