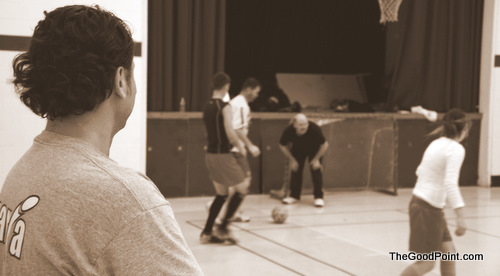 The snow-soaked streets of Hamilton, Ontario are miserable enough in January, colder still without the luxury of a consistent address to call home. Sadly, a life of homelessness – or the looming threat thereof – is a distinct reality for close to 20 per cent of the industrial graveyard’s 500,000 residents.

Though general misfortune strikes individuals in the hapless community indiscriminately of age or personal condition, there does exist one equalizer that stands apart among the housing shelters and social services perilously tasked with making the hard life easier: the power of sport.

Sport as a therapeutic tool is a phenomenon easily cast aside by the majority, but immensely appreciated by anyone who’s ever felt it’s impact. It’s what’s made Street Soccer Canada such a valuable, if quiet, difference maker in the underprivileged community.

Tucked away in the neon-lit gymnasium of a former elementary school building in a dark corner of North Hamilton is a slice of normalcy, a desperately-sought source of salvation from the unforgiving world waiting outside. It presents in a game of indoor soccer.

Cradling his chin in the crook of his hand, Billy Pagonis overlooks the ceramic “field” in front of him. The squeak of sneakers and chorus of shouts are familiar sounds for any lifelong athlete. For Canadian Pagonis – a former professional soccer player by way of Switzerland and Germany – especially so.

It wasn’t long ago when the man, now pushing 50 years old, was a role model athlete, a devout child of the game committed to playing it often and playing it well. When the opportunity to sign a contract in Europe arose in May of 1992, he pounced and rode it well into the twilight of his physical prime.

As an athlete playing the game he’d always aspired to play, Pagonis lived a life of luxury, driving expensive cars and living his dream.

Today he rides the subway.

“I woke up every morning for almost 20 years in the professional lifestyle of a soccer player. I just lived soccer and breathed soccer,” says Pagonis. “Soccer got me my education, my friends, my health.”

As Pagonis surveys the action on the multi-purpose gym floor before him he does so not as a coach or literal expert on the subject (though he’s both), but as a symbol of what the program stands for.

Street Soccer Canada is a not-for-profit organization launched in 2004. One that by 2008 had been incorporated as a registered charitable organization and today touches 12 communities from Vancouver, British Columbia to Halifax, Nova Scotia.

Much like Street Soccer USA and the 70-odd likeminded national programs across the globe, Street Soccer Canada aims to connect and engage with underprivileged individuals through social inclusion and the support of a community.

When Pagonis first heard of the organization, it was the type of community he craved.

In 2007, while in rehabilitation for an OxyContin addiction brought on by a painkiller habit that haunted him in the wake of his playing career, Pagonis caught wind of the Toronto-based organization connecting men and women in need through sports – through soccer specifically, the very craft on which he had always relied.

“As soon as I stopped playing soccer, the only thing that was left for me to do was continue partying,” Pagonis explains. “The wrong environment, the wrong choices, the wrong friends. That’s how I went from the top to the bottom.”

The downward spiral was a tragic one, a drug-laced journey bottoming out with a middle-aged man left wanting as the game he loved passed him by. But the humbling stint at the bottom only armed the man further in his quest to aid individuals currently dealing with similar burdens.

“[I asked myself] ‘What was I doing then that I’m not doing now?’, and that was kicking a soccer ball. So I’ve always made a quote ‘kick the habit, kick the soccer ball.”

Nowadays Pagonis roams the sidelines of his indoor soccer pitch, a three-year veteran of the program whose role has evolved from beleaguered participant to national head coach. In August of 2011 he manned his team at the annual Homeless World Cup in Paris, France and this year he’ll take them to Mexico City.

As an athlete who participated on the field in Australia’s 2008 Homeless World Cup, he’s the perfect storm of experience.

“I can turn around and say I was the only player out of 56 countries that played in two World Cups. The Homeless World Cup and the National World Cup. So that’s a statement right there, meaning that anybody can get into a bad situation, by choice or by your roots.”

Brian Mullan is a 19-year-old kid from the east end of Hamilton, a former hockey player and current roofer of five years. At 15, Mullan left an abusive situation at home for the sanctuary of independence and has lived alone ever since. Ten months ago, what had finally started to resemble domestic stability came crashing apart.

When a fight with a landlord left the teenager out in the cold, Mullan had no other option but to get in contact with a youth shelter in town. For some a visit to a shelter is a temporary setback, for others, it’s anything but.

”You know when you’re at the bottom and it’s like ‘Kay, what do I do? Shit I have nothing right now’. That was my situation,” says Mullan.

Fortunately for Mullan, on the second day of his stay at the shelter he came in contact with Street Soccer Canada and hasn’t looked back. The routine, he attests, has added a much-needed source of consistency and stability to his life.

“Every Tuesday I know I have somewhere to go, something to do, someone to talk to.”

By the end of his first week at the shelter, Mullan had bounced back and secured accommodations elsewhere, but not before discovering a genuine appreciation of what the program and others like it can offer.

”I think routine is probably the biggest thing in life. You’ve got to keep a routine in order to stay on track and this is on your way to keeping a routine.”

By the end of his first summer in the program, Mullan was representing the national team in Paris and remains a regular member of the Street Soccer Hamilton community with hopes of volunteering with the organization for as long as they’ll have him.

As Pagonis surveys the players pounding the soccer ball up and down the aged gymnasium, he offers pointers and advice, fundamental tips that only a longtime product of the game could know. More than just an encyclopedia of strategy, though, he serves as a source on whom athletes in the program can personally rely – whether playing for their first time or for their 50th.

“Kids come up to us after a while when they feel comfortable with us. They think we’re more friends than anything else. We’re not their case workers, we’re not their parole officers.”

Pagonis is not alone. Although he, along with program director and founder Paul Gregory serve as the figureheads of Street Soccer Canada, it’s with Phil Ruicci that he manages the daily operations of the Hamilton division of the organization.

Ruicci – a 24-year-old therapeutic recreation graduate of nearby Brock University – was charged with the task of championing the recent expansion out to Hamilton, and has reveled in the opportunity.

“Working with these guys is a character builder every day. It’s emotional. For a lot of the guys it’s isolated, they don’t talk to each other, they don’t talk to staff, to anyone, really – so seeing their change from Day 1 until today, they’ve changed drastically. They’ve become the person they used to be when they were happy, when their life was stable, when their family was in tact.”

With Pagonis, Ruicci frequents a handful of shelters in the area, youth shelters like the one Brian Mullan stayed at – but predominantly men’s and adult shelters.

“A large majority [of the burdens that plague Street Soccer athletes] are mental health and drug addiction,” he summarizes, “But there are people that come because they’re vulnerable at that given time.”

Together Ruicci and Pagonis, not only organize and lead practices, scrimmages and tournament entries, but coordinate gym rentals and manage relationships with shelter administration.

Though Street Soccer Hamilton has expanded rapidly in its first year of operation, the ongoing pursuit of accessing shelters and individuals who might benefit from the program’s service is an endless struggle.

Before every scrimmage, clad head-to-toe in Street Soccer training gear such as new soccer cleats, Ruicci and Pagonis visit the roster of shelters within which they’ve been cleared, campaigning for the program and spreading word about the organization. If they can find and improve the situation of even one individual, it’s an afternoon well spent.

“Billy is an ideal person for this job. He’s been in their shoes. The kids and adults that we deal with can’t bring up a topic that Billy hasn’t dealt with.”

That blend of knowledge and familiarity is what makes the pair a sight to behold, whether playing off each other to sell the benefits of the program to a group of reluctant teens smoking casually in the entranceway of one of Hamilton’s tattered shelters, or competing heatedly against one another for bragging rights on the pitch before practice.

The enthusiasm and passion evident across the board speak to the organization’s ability to transcend the harsh reality of the outside world, if even for temporary relief.

Mario Erich, a Croatian immigrant from the former Yugoslavia knows exactly the benefits that that energy can provide. It took three weeks of Pagonis and Ruicci’s salesmanship to convince him to participate for the first time and he hasn’t looked back – even since moving on from the shelter at which he was staying at the time.

“We have intensity [here]. We have a lot of fun, but we have a lot of intensity, and for that small time you forget the burdens that may be burdening you during your day,” the 41-year-old says, “Because you feel light and free here, you can go back and recapture the feeling, even when you feel a little bit stressed about life.”

A framing carpenter by day, Erich – like the bulk of Eastern European migrants – grew up playing soccer, but was reluctant to re-engage in the sport. Initially content passing on the opportunity, consumed at the housing shelter by his own financial setbacks, Erich was eventually convinced.

”People have a choice, eh? We like to take the easy route and to sit back in the stands, but once you come and you become a participant, you see how much fun it is.”

Having already used the sport of boxing to kick struggles with alcohol as a recently-landed Canadian migrant in the early 1990s, it didn’t take long for Erich to appreciate the benefits of physical exercise and the support of the Street Soccer community.

”One of the things that helps when your life gets a little bit chaotic, when you get a curveball, is to have something like routine, something that you can look forward to.”

On that everyone – everyone who has ever watched helplessly as their lives derailed in front of them, at least – can agree.

”We don’t care who you are, we don’t care what your situation is – I mean, we do, we’d love to hear it,” adds Mullan, “But we don’t hold it against anyone because we’ve all been in that spot.”