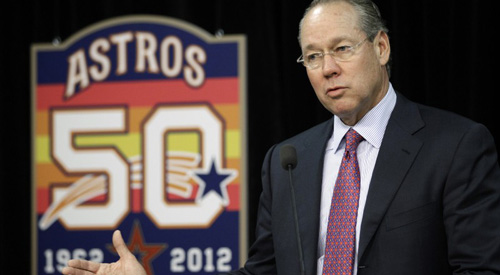 Houston and the Astros: Celebrating the Golden Anniversary

Happy Birthday to the Houston Astros!

The team is celebrating its 50th anniversary this season and there’s plenty to commemorate.

Not only are the Astros looking back at 50 years, but they’re also looking forward and about to start a new chapter.

The Astros are moving from the National League Central to the American League West. This change will commence next season.

From an outsider’s perspective, the move makes sense. There are 14 American League teams to 16 National League teams. The NL Central is the only division in Major League Baseball with six clubs, while the AL West has the fewest with four.

Having Houston switch over to the AL will even things up – five teams per division, 15 teams per league.

But despite equal alignment, there is a contingent of Astro fans who are not happy with the upcoming change. One website – AstrosDaily.com – has even declared 2012 as the final season and told readers that any historical documentation might not “carry over to the 2013 season and beyond.”

Bob Hulsey is the creator and lead writer of AstosDaily.com. He opposes the move because he feels MLB forced Houston’s new owner, Jim Crane, to change divisions by offering a $65 million discount on his purchase of the team.

“$65 million is enough to cover some team’s payroll for a year,” says Hulsey. “Had Bud Selig dangled that much money at, say, the Pirates, Padres or Marlins, they might have volunteered to switch instead of extorting, as Lance Berkman correctly put it, one team to move.”

There are other reasons, according to Hulsey. A loss of rivalries, games against certain divisional opponents starting later and the implementation of the designated hitter.

“Personally, I think baseball with the designated hitter rule is far less interesting,” he states. “I love the strategy and chess matches involved with having a pitcher in the lineup and that’s ruined by the DH.

“Remember last year’s World Series and recall that all the truly memorable games were the ones in St. Louis, not Arlington.”

One local attorney even tried to legally prevent the move.

“[The Sports Authority] simply ought to refuse to renegotiate their lease,” Yankowsky told Steve Campbell of the Houston Chronicle on November 16. “[The Sports Authority] can quite simply lock the doors and say, ‘No, it’s not a permitted use.’ The play of Major League Baseball games, by definition, are limited to games in which a National League team is the home team.”

When asked for a response, an official with the Sports Authority told Campbell that Yankowsky provided “an interesting analysis” and its attorneys would “review the matter.”

While some oppose the move, Hulsey admits some fans are looking forward to the change.

“Houston, like the rest of the state, has seen a huge influx of people from other parts of the country looking for jobs,” says Hulsey. “They bring their fan identities with them…So, the concept is that the Astros will benefit from all the Rangers, Yankees and Red Sox fans who will attend when their teams are in town, regardless of how vacant the stands will look when the rest of the AL comes to visit – other than the fans who moved from those areas because they needed a job.”

Perhaps one benefit of moving to the AL West would be more games against the Texas Rangers; a battle of Texas or “lone-star series.”

For their part, the Rangers are looking forward to their new division rival.

“If both teams are competitive in a given year, I think it will create a good rivalry within the state,” Rangers president and former Astro Nolan Ryan told MLB.com’s T.R. Sullivan in November, 2011. “I think there are a lot of pluses from our perspective.”

Hulsey acknowledges the rivalry will be enhanced by having the two teams play in the same division. Like Ryan, he also feels the rivalry will grow if both clubs are at the same competitive level. But while the Rangers have succeeded these last few seasons, the same cannot be said about the Astros.

Based on this, Hulsey only sees one team benefiting from Houston moving to the AL West. It’s not the Astros; it’s the Rangers.

“Forcing the Astros into the AL benefits the Rangers even more than it hurts the Astros,” says Hulsey. “Now, the Astros have no competitive advantage in the marketplace for baseball fans because they’ll offer nothing the Rangers can’t match or exceed, from TV coverage to local farm teams.

“In short, there’s no upside to being an Astros fan over being a Rangers fan, other than sitting under a roof at home games. If Jim Crane is true to his word that he won’t increase his budget beyond his revenues earned, expect the Rangers to dominate them for the rest of the decade and possibly the one afterwards.”

Change is not an easy process. No one can expect every Astro fan to embrace the American League after 50 years of National League-style baseball. It will take time; maybe years.

In addition, this upcoming transition only adds to the problems Houston faces.

Hulsey paints a dreary picture of the Astros and their current situation. As of June 6, the team sits fifth in the NL Central, 7.5 games back from first-place Cincinnati. However, Houston has started the process of rebuilding after selecting 17-year-old Carlos Correa with the first pick in the 2012 MLB Draft.

If Correa and any other future picks exceed their potential, the Astros will become a threat, regardless of which league they play in. At this time, however, the future appears bleak.

“Of course, if the Astros manage to find extraordinary young talent like the Rays did, they may break through,” says Hulsey. “Otherwise, it will be a long time before the Astros will win any titles.”