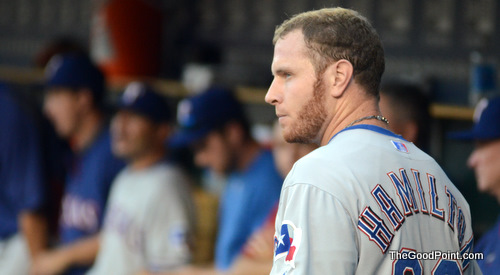 Josh Hamilton: The God Who Couldn’t Rely on God

Late on Monday, Josh Hamilton stepped back into the middle of his uphill battle; the unrelenting fight against his neural proclivity for alcohol’s empty release. Free of the monotonous burden he carried dutifully since 2009, stripped of his overbearing obligation to God, he roamed the streets of Dallas flirting with the allure of the gutter, but reserved enough to commit.

The man’s brain works differently than yours, just as yours works differently than mine and mine his. It’s a natural concept vastly impressive for those who recognize it but one that’s sorrily overlooked by the curious hordes who crawl to the scene of the relapse like children banging on the glass wall of an enclosure at the zoo. For much of this week and on into next, fans and journalists will speculate over the 30-year-old’s future, his prospects of landing a long-term contract and his debatable merit as a legitimate franchise player. In step, doctors and neurologists around the world, too, will struggle to come up with answers relevant to the situation, not as they pertain to fantasy baseball, but to the enigma of alcoholism in general.

In brief, Hamilton officially fell off the wagon after years of sobriety, back to the depths he fought so desperately to escape from in the middle of last decade. From 2001 until 2005 the former No. 1 overall draft pick was as good as dead to baseball before his triumphant return in 2007. By 2008 Hamilton had become the superstar that exists today. In 2009, however, a Deadspin-documented slip-up cost him both sobriety and trust, the latter of which he had only recently started to recoup.

After the 2009 incident, in which he was exposed drinking in excess at an Arizona bar, fans and supporters who had grown to appreciate the man’s story (not to mention his ability to clear the bases) were reminded of the truth behind the fairy tale.

Fast forward to today and it’s almost as if we wish we spoke up.

Life as a recovering alcoholic is demanding enough without celebrity, but even among the professional athletes and actors known to struggle with substance abuse, Hamilton stands alone. In barely over a decade the man has squandered over five years of a potential Hall of Fame baseball career, temporarily binged himself out of his family home, woken up deliriously among crackheads in a Florida trailer and spent time in jail.

Sports Illustrated‘s Albert Chen wrote back in 2008 what even to this day stands as perhaps the most comprehensive account of Hamilton’s trials and tribulations.

During his darkest hours — after he had been banished from baseball in 2004 and was doing coke, downing a bottle of Crown Royal a day and burning through his entire $4 million signing bonus — Hamilton had recurring dreams that he was “fighting the devil, an awful-looking thing,” with a stick or a bat, swinging but always missing. In his dreams he saw a SWAT team outside his window, about to storm his room; he saw demon faces; he saw his father on the other side of the door trying to save him.

Since the article, since Hamilton stormed back as a salvaged star, and since even his 2009 relapse, the man been involved in an accidental death at the Ballpark in Arlington and led the Texas Rangers to consecutive World Series appearances only to come up painfully short each time. It’s not easy being he.

But although the laundry list of painful experiences may serve at first glance as warning signs of an inevitable, dark future. They more aptly describe just how far the man has come thanks to the strength of himself, his family and friends. Notable exception intended.

On Twitter, Hamilton augments his profile with just four words: “God family then baseball”, as if a punctuationless hierarchy of what’s truly important in his life. As glaring as the missing comma, however, is the blatant reference to the role faith plays in his life. An awkward but acceptable 21st century stance at best, the claim borders on concerning given the added importance perspective has for individuals with Hamilton’s history.

Curiously, not only has the centerfielder publicly credited his sobriety to God, but even his ability to speak with the family of the man who fell to his death last summer, and his 10th inning home run in the World Series last fall. Within a minute of his apologetic MLB TV press conference on Friday afternoon, he had reinforced his reliance on “the Lord”.

With so much of the foundation of his life apparently hinging on the gifts and blessings of a theistic influence, it’s almost as if Hamilton has deflected, along with the credit, the accountability of his actions. Though hardly an intentional attempt to shirk responsibility, the submissive approach could plague his recovery until the day he finally learns to recognize and appreciate his own role in his impressive recovery.

Though faith is natural for individuals struggling to overcome addiction, blind dependence on an intangible influence is a precarious thing. In his most recent press conference, Hamilton spoke solemnly about the events that transpired earlier in the week, the personal issues that led to his dining alone in a local restaurant and the moment of buzzed clarity that had him seek support in teammate Ian Kinsler.

He recognized the strength of his family and wife, he spoke genuinely and realistically about the arduous pursuit of sobriety, but he also – like clockwork – spoke freely of God while articulating his struggle. It’s been evident for a while, and especially recently, that Hamilton understands the biological complexities and the behavioural patterns of addiction, almost as well as he understands how to connect on a pitch.

Both as a man and a professional athlete struggling with a chronic condition, Hamilton is well aware of his limitations and the responsibility that comes with it. One can only hope that it will be sooner than later when he realizes there’s nothing mysterious about his tendency to succeed.