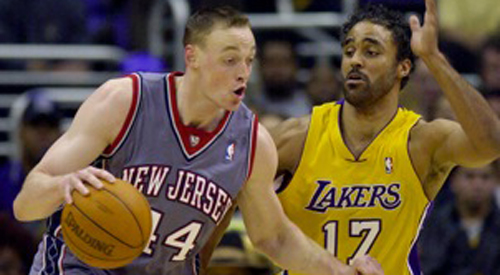 Keith Van Horn’s pale, gaunt face haunts me while I sleep. Not in a Paranormal Activity 2 way, but a Charles Dickens-meets-W.P. Kinsella sort of way. Monthly at first, then weekly. Now almost every damn night.

So imagine, if you will, falling asleep with the seven-foot silhouette of a man watching you through your doorway, his surprisingly muscular knees at eye level while you peek between the cracks of your blanket and pillow.

If you’re willing to believe, it’s not as scary as it sounds. In fact, it’s more comforting than anything else. When Zack Morris awoke to the ghost of Chief Henry, he too neither panicked or froze.

To me and others like me, this thin-haired man is a familiar figure, a symbol of a game that exists today only in memory. An unassuming relic of basketball’s past. He certainly isn’t or wasn’t anything more. As I struggle to shut my eyes each night, I imagine what I’ll say when I’ve built up the courage to finally address him. “Why you?” I would ask, or “Why me?”

Over the course of my childhood I had no particular connection to the ghost who haunts me now, which makes the consistency of his visits all the more odd. I cared not for the Nets or the WAC, and didn’t think twice when he revolutionized what it meant to shoot threes as a four.

Though he once finished fifth in all NBA scoring, and helped lead New Jersey to an ECF crown, the memory of his promising career has since dulled, like a dream slipping out of the mind to the depths of the subconscious.

His presence, however, is neither vengeful or jealous. That his intentions are peaceful is the first thing you notice when he walks in your room.

You can tell just by looking through his wormhole-shaped eyes that he comes for a reason; one other than to remind us that he was once to Dirk Nowitzki what MySpace was to Facebook; the necessary bridge between what could be and is.

His seemingly harmless presence, it seems, is then quite possibly a warning; a sign that things to come aren’t necessarily things that should. Or that things long since past should return in the present. But maybe it’s neither.

Maybe, after all these restless nights, Keith Van Horn is here to finally say goodbye. Perhaps for himself or for all the almost-stars that helped us through the Michael Jordan hangover; to tell us that it’s okay to move on and cheer for Kobe Bryant to match Jordan in threepeats, or to forgive LeBron James and enjoy the Miami Heat.

His only condition, I’m sure, will be that we have someone worthy when we bring back his socks.