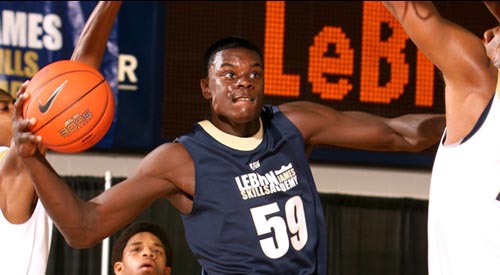 Maybe you’ve heard of him, and maybe you haven’t, but if you’ve familiarized yourself with the AAU circuit, watched any high school all-star games lately or opened an issue of SLAM in the past four or five years then chances are pretty good that the name Lance Stephenson rings a bell.

The Abraham Lincoln High senior has been touted the next big thing since he held his own against O.J. Mayo (considered the best guard in the country at the time) as an eighth grader at the 2005 ABCD camp. The then-17-year-old Mayo won the battle with 21 points, but Stephenson contributed 16 to his team’s cause and flashes of greatness earned him the nickname “Born Ready”.

After a sophomore campaign in which the 6’5″ swingman posted averages of 26 points and 10 boards, Stephenson lived up to his nickname at the 2007 Boost Mobile Elite 24 Hoops Classis (an annual high school all-star game played outdoors at Rucker Park). Putting up 36 points, and earning co-MVP honours, Stephenson looked like the best player on the court amongst the who’s who of high school guards, including current Memphis freshman Tyreke Evans, UCLA’s Jrue Holiday, USC’s human highlight reel Demar DeRozan and Arizona recruit-turned-European pro Brandon Jennings.

Former NBA coach and player Paul Silas said at the time that “athletically, he’s good enough to play in the NBA right now”.

Born Ready’s accolades in New York already place him amongst the city’s all-time greats. Stephenson has led Lincoln High to the city championship in each of his first three seasons, and has seen his squad crowned state champs in both his sophomore and junior efforts. Along the way he’s garnished NYC Player of the Year honours the past two years and has been named the Daily News Player of the Year the past three.

The youngest player to ever compete in the Rucker’s acclaimed EBC ProAm circuit, Stephenson earned MVP honours in last season’s championship game over five current NBA players and finished his junior season as the No. 1 ranked high school player in the country.

ESPN’s Reggie Rankin said that “Stephenson has the ultimate scoring mentality. He thinks he can score on anyone, at any place and any time. Stephenson is in attack mode on every catch. He is a shot creator in transition. In the half court, he is a physical driver and threat to get all the way to the rim, shoot the pull-up jumper or knock down the open three. Stephenson has the killer instinct on the offensive end of the floor.”

The star guard, who is said to be considering Kansas, St. John’s, UCLA, USC and Europe, is currently ranked as the No. 7 recruiting prospect in the nation by ESPN and eclipses North Carolina high school star John Wall as the No. 1 player in the class of 2009 on SLAM magazine’s annual Fresh 50 list. Still, others don’t seem so convinced.

NBAdraft.net lists John Wall as the No. 1 overall selection in its 2010 Mock Draft. Stephenson doesn’t even make the list, nor does he rank in their top 10 players in the class of ’09.

Okay, so now you’ve heard what the authorities on the subject think and I’m going to tell you what I think. Let’s just say that I am going to disagree with NBAdraft.net, respectfully of course (keep up the good work guys, the site is great). Regardless of where he plays next season what was true then, remains true now: Stephenson is ready to play.

His workout regime makes him physically ready for the NBA right now, couple with this an ever-improving defensive focus, great passing skills and a solid work ethic, and the NCAA is looking at a star next year (if he stays on this side of the Atlantic). What makes him truly special however is his ability to get buckets and create his own shots against all levels of competition.

In my opinion, the high school class of 2009 will be remembered for Stephenson, John Wall, another talented guard by the name of Xavier Henry, and dominant big men Derrick Favors, Renardo Sidney and DeMarcus Cousins.