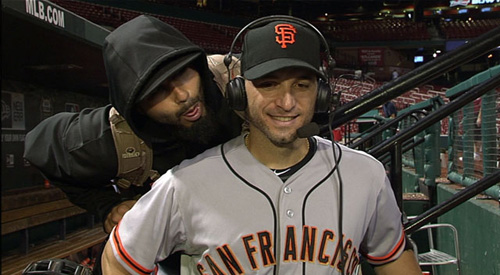 Let’s talk trade. Marco Scutaro knows the feeling, having been exchanged four times in his career.

This last trade was widely overlooked. It simply didn’t seem to be the sort of game-changing deal that garners national attention – especially not after the Los Angeles Dodgers, the Giants’ arch-nemesis, had acquired saturnine Marlins All-Star Hanley Ramirez two days earlier. On August 25, the Dodgers grabbed the headlines again, picking up the Red Sox’s Adrian Gonzalez, Josh Beckett, Carl Crawford and Nick Punto in a “blockbuster” sort of trade. Certainly it appeared now that the Dodgers were the favorites to capture the National League West.

Instead, while Ramirez, Gonzalez and Beckett failed to heat up the Dodgers, the overshadowed Scutaro caught fire. The 36-year-old infielder torched National League pitching for a sensational .362 average in 61 games. In September alone, Scutaro batted .402 with 41 hits and 22 runs scored, helping the Giants pull away en route to an easy division title. Scutaro’s teammates didn’t miss a beat, pegging him with the nickname “Blockbuster.” After all, it had been his acquisition via trade that caused their late-season surge – and that made him the blockbuster acquisition that the rival Dodgers had been searching for. Credit San Francisco GM Brian Sabean in spades.

In the National League Championship Series, the national baseball viewing public discovered exactly what the Giants had gained in exchange for Charlie Culberson’s services. Marco “Blockbuster” Scutaro batted .500, collecting 14 hits, two walks, six runs scored and four runs batted in as the Giants came back to top the St. Louis Cardinals in seven games. For his efforts, Scutaro was rightfully named the NLCS Most Valuable Player.

(The series also marked a measure of postseason redemption for the Venezuelan native: In his last Championship Series, the 2006 ALCS, he was just 1-for-15 while his Oakland Athletics were swept in four games by the Detroit Tigers. And in the Giants’ first round series, the 2012 NLDS against Cincinnati, he was just 3-for-20, going virtually unnoticed as the Giants persevered in five games.)

If you were looking for additional lessons on how canny trades can shape a team’s fortune, you don’t have to look all too far. The Detroit Tigers, the Giants’ World Series opponent, were built on the foundation of Dave Dombrowski’s deals.

Consider the starting rotation: Beyond ace Justin Verlander, a Tiger draftee, there’s Anibal Sanchez, dealt from the Marlins this summer; Doug Fister, acquired from the Mariners in 2011; and Max Scherzer, gained in a brilliant three-team deal with the Arizona Diamondbacks and New York Yankees in 2009.

In the starting lineup: second baseman Omar Infante, arriving with Sanchez from Miami in 2012; DH/left fielder Delmon Young, the 2012 ALCS MVP, picked up from Minnesota in 2011; shortstop Jhonny Peralta, plucked from the Cleveland Indians in 2010; center fielder Austin Jackson, delivered from the Yankees in a 2009 mega-deal; and, lastly, the extraordinary Triple Crown-winning third baseman Miguel Cabrera, brought in from the Marlins in 2007.

We could even continue into the Tigers’ bullpen, if only to include another member of that memorable Yankees/Diamondbacks deal, valuable left-hander Phil Coke.

But all of this talk of trades comes with a caveat.

The New York Giants convinced the Cincinnati Reds on December 15, 1900, to send them the unproven Christy Mathewson for the great Amos Rusie, the “Hoosier Thunderbolt.” Mathewson won 372 games and a World Series title for the Giants; Rusie finished 0-1 with an 8.59 ERA in just three appearances for the Reds. The Giants “won” the trade; the Reds “lost.” In this same sense, the 2012 Los Angeles Dodgers gambled that Boston’s high-priced, underperforming stars would excel in the National League West. They lost that gamble.

Each year the World Series shines a spotlight on one from each league that has, for a limited period of time, captured success in bottle.

Sometimes, as in the Tigers’ case, that means a cavalcade of acquired talent to build around the team’s homegrown foundation. Other times, as in the case of Giants, all it takes is a blockbuster.