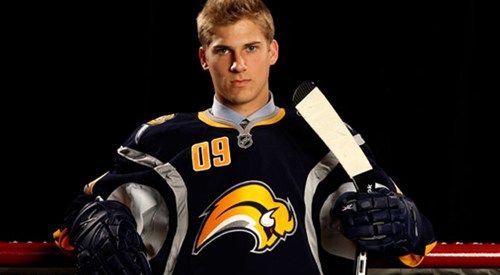 There are points in life when it’s nice to have your parents next to you; your first day of school, your first hockey game and graduations to name a few.

For a professional hockey player, the list goes on. You can add to the mix your draft day, your first time representing your country and, of course, your very first NHL goal.

Marcus Foligno grew up in a hockey home wanting to be a pro hockey player. On his way to living out his dream, he followed the footsteps that were laid out for him by his family, like tracks in a snowstorm.

“It was awesome. It was hockey all the time. One of the things my mom always told us was that even when it was summer-time we were playing hockey or doing something around the sport,” said Foligno. “My whole family has been a pretty big support my whole life.”

His father Mike Foligno played for the Sudbury Wolves, was drafted to the Detroit Red Wings and played in the NHL for 15 seasons. Though he played over 1,000 games in the show, the eldest Foligno is remembered particularly for his trademark two-foot jump goal celebration.

His brother Nick Foligno also played for the Wolves. He then was drafted to, and has since played for the Ottawa Senators. After scoring his premiere NHL goal in Oct. 2007, Nick delighted classic hockey fans, paying tribute to the eccentric goal celebration of his father.

As has become somewhat of a family tradition, Marcus currently plays for the Wolves and was drafted to the Buffalo Sabres in the fourth round of the 2009 draft.

“(The Sabres) know about my dad and Nick. It’s somewhat challenging, but it’s also fun,” said Marcus. “You have that name, and people know what you might be able to bring to the game.”

His whole family, including mother, Janis, and two sisters, are all big fans of the game that put food on the table in the Foligno family residence. But even as a young kid, Marcus dealt with the occasional downside of sharing his name.

“I went to school with a guy named Marco Folino,” he recalls, laughing. “There was one day when he got in trouble in music class and I didn’t even have music that day. My mom got a phone call, came home and ripped me one. She didn’t believe me.”

When brother Nick was drafted, Janis and the rest of the Foligno clan were there to hug him before he walked down to the stage to exchange his suit jacket for a Senators jersey.

For Marcus though, there was a glaring absence. Janis was too sick to come; she was battling breast cancer.

Marcus looked at what she was going through every day and took the pain and anger he felt from within and used it on the ice. But one thing that couldn’t be transferred was the pain that he had at the end of July, 2009.

The loving mother of four, and the one who always told her children, “you were American-born but Canadian-made”, succumbed to her cancer at age 47.

She will be there in spirit, though, and in the hearts of the Foligno children and an entire hockey community that extends beyond their familiar Sudbury. For good measure she’ll be in Marcus’ jersey too, where he has played with her initials stitched ever since.

If, and perhaps when, Marcus does manage to play his first game with the Sabres, and when he finds the back of the net for the very first time, he knows exactly what his celebration will be.

“Definitely the jump. A little higher than Nick’s though. Nick’s was weak.”