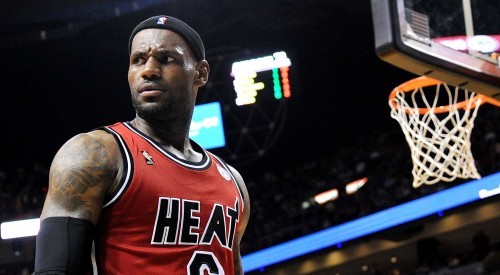 Some might forget the landscape of the NBA, say, two, three seasons ago. The Spurs were still their dominant selves; the Dallas Mavericks were championship contenders behind one-time MVP Dirk Nowitzki, and the rivalry between the Celtics and Lakers was renewed as those teams would meet in two highly spirited series for the Larry O’Brien trophy.

Then there were the Miami Heat.

The uber-dominant Heat squad, as they’re now prolifically known, have defiantly put themselves in that upper echelon conversation. It started on that fateful afternoon in July; the “Decision” aired live on ESPN and was heard throughout the world. LeBron James would leave his hometown Cleveland Cavaliers and take his talents to South Beach.

Many had assumed, or come to the conclusion based on previous precedent, that James would depart Cleveland regardless of what happened in that final postseason run. What rubbed a lot of people the wrong way, especially fans in Ohio was the televised spurning of his home state. They say “Haters gon’ hate” and did they ever. James, Dwyane Wade and Toronto public enemy No. 1 Chris Bosh embraced the villain role that season. They were booed everywhere but home, and with sheer force from various fan bases.

The questions began to ensue as the team struggled, first to start the season and for periods throughout it. Could they successfully run the screen and roll? Could James and Wade co-exist together, on the court at the same time? Where was Bosh getting his shots from? Perhaps the most slighting questions were; is LeBron good enough, strong enough mentally to close out ball games? Should the Heat have Wade as their primary closer? Those questions plagued the team as they advanced to the finals their first year together, against the Mavericks. James and company got off to a great start in the series before allowing the Mavs to completely take over and win four straight. Those aforementioned questions began to persist even further.

The Heat have positioned themselves quite well since that point. The team has developed a culture and identity that wasn’t apparent before. There is cohesion, as is evident by the resiliency, when you’re a defending champion with a target on your back. Nonetheless, The Heat are in a league of their own. En route to a league best 66 wins, including a 15-1 record against the division; the Heatles ranked top five in both points scored and fewest opponent points. The scoring is and was always there with Wade and James, plus the addition of All-World shooter Ray Allen. The fascinating statistic is the defense. This team has been like leeches defending their opponents this season, without a true, real sized center. Chris Andersen has been a spark plug for this team as they have only lost three times in their last 50 games since he joined them.

The team defense has been good also as the team has fully bought in to coach Eric Spoelstra’s schemes. They close out on shooters, and clog the passing lanes, feeding the attack, and enabling their bread and butter on the offensive end. Most teams struggle to win 60 games in a season; to win 66 during a title defence is something else. The Heat won the majority of those games easy too. Out of their 82 games, including their first round sweep of Milwaukee; they have only had 12 games decided by three points or less. In other words; they’ve absolutely crushed everyone in their path throughout the entire season.

The evolution of this team spanned to their toughness and durability. Collectively, they had their share of injuries throughout the entire season. Both James and Wade, along with Bosh missed games this season. Injuries and the lack of depth this team had to contend with was always a concern for fans and experts alike. No one knew how this team would respond without one of their superstars.

Unlike other teams, it galvanized them. Including their series clinching win in Game 4, the Heat are 12-2 this year without Dwyane Wade. They have learned to weather the storm and play through adversity.

After winning almost as many games consecutively as there are teams in the league, it’s becoming more and more evident the Heat will defend their throne. LeBron should go on to win his fourth MVP award, and most likely his second straight finals MVP. After the first sweep in the Big Three era, Miami is asserting itself on the rest of the Eastern Conference.

That’s bad for the remaining teams and whoever makes it out of the west.