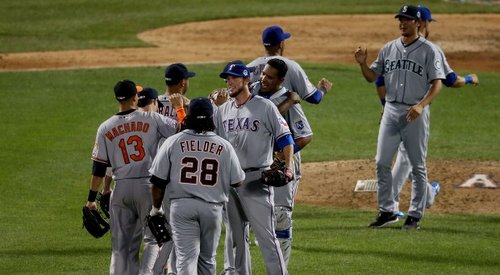 Picture this: an American League team wins 96 games during the regular season, best in its division and second overall in a tight playoff race. That same year, a National League team wins 90 games, scraping out a wild card berth by the slimmest of margins. Both clubs catch fire in the postseason, clinching the pennant and reaching the World Series. By virtue of their superior regular season, the American League team could naturally expect home field advantage in the championship. Right?

The scenario described above is that of the 2011 World Series, in which the 90-win St. Louis Cardinals hosted Games 6 and 7, winning both to overcome a 3-2 deficit against the 96-win Texas Rangers. Why on earth did the Cardinals, with six less wins, hold this advantage on baseball’s biggest stage? Because of MLB’s greatest folly, in which home-field advantage in October is awarded to the league that wins the All-Star Game each July. The Midsummer Classic doesn’t truly count, yet there’s a chance it could count for everything.

By scheduling 162 games for each team, baseball is designed to eliminate anomalies. It’s the meritocratic objective of large sample sizes: since no team can sustain luck or an unlikely hot streak over six full months, the best clubs will inevitably rise to the top. MLB enforces this exclusivity even further through the most selective playoff structure of any major North American sport. Over half of NHL and NBA teams crack the postseason on a yearly basis; 38% of NFL franchises earn a shot at the Super Bowl. Even with the addition of the wild-card play-in game, only one-third of baseball teams are mathematically alive when the regular season ends.

It’s survival of the fittest, which makes the present method of determining home field advantage even more maddening.By sticking to its system, MLB prioritizes a glorified exhibition above all meaningful games – an exhibition heavily influenced by injury replacements, fan ballots and the whims of two managers. A total of 2,430 games are played each year, and the one with no bearing on the final standings somehow has the most singular value.

Mandating that every team must be represented in the Midsummer Classic is another deviation from the exclusive norm. Despite winning 11 straight games in June, the Toronto Blue Jays are 11.5 games back in the AL East; they’re another record streak away from even sniffing the playoffs. Nevertheless, they sent four players to this year’s All-Star Game – Jose Bautista through the initial round of fan votes, Edwin Encarnacion and Brett Cecil as elected reserves and Steve Delabar by way of the online Final Vote.

As middle relievers go, both Cecil and Delabar are enjoying fine major league campaigns. Both acquitted themselves well during their All-Star stopover, each facing one hitter in the seventh inning and registering a strikeout apiece. Still, it’s absurd to consider the possibility of Steve Delabar – a journeyman reliever on a sub-.500 team that only cracked the final roster because of a spirited last-minute social media campaign – influencing the makeup of the World Series in any way with his performance in an exhibition game. Those implications should never rest on Delabar’s shoulders – or those of any random All-Star, for that matter.

As it were, the implications were shouldered by Bautista, who opened a 3-0 game by driving in the winning run – the run that assured the American League’s eventual champion home-field advantage in the World Series, even though his team has limped to a miserable showing over 94 games of actual baseball. The eventual winning pitcher was Chris Sale, beleaguered ace of the dismal Chicago White Sox. With his team languishing in the basement of the American League, why should Sale’s two innings of exhibition work give a completely unrelated club a boost down the road?

Curiously, many clubs that may actually challenge for the championship lagged behind in All-Star representation. The ninth-place Jays sent more players to the showcase than all but two of their AL rivals. Oakland and Boston are jostling for position at the top of the standings, but boast just two and three All-Stars, respectively. If anyone will benefit from the AL’s win by reaching the World Series, it’ll be them – or Tampa Bay, Texas, Cleveland or the New York Yankees, all clubs whose records far exceed that of Toronto’s, and all clubs who still sent fewer players to Citi Field this week.

The All-Star Game remains important to baseball because it’s fun, and not, coincidentally, because it’s important. By allowing it to determine important outcomes, MLB cheapens the significance of top performances during the actual season. Back on May 7, the Mets’ Matt Harvey threw nine innings of one-hit ball against the Chicago White Sox, prolonging a scoreless tie long enough for the Mets to win 1-0 in the 10th. In a way, that performance means less than his cup of coffee at the All-Star Game, in which he threw 30 pitches and surrendered one hit in an eventual loss.

Perhaps that’s the way things should be: phenomenal as Harvey’s May 7 outing was, it still accounts for just one result of 162. The All-Star Game, a fun interlude to the dog days of the regular season, shouldn’t factor into the thousands of meaningful contests played each year. Inexplicably, it stands above.