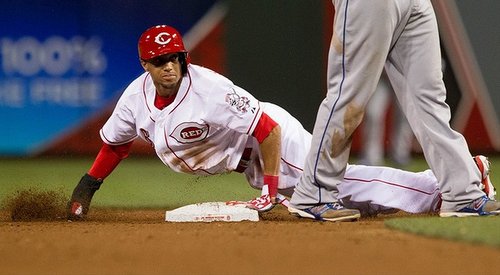 The idea really is stirring, that a baseball game has so many gears in motion – the one-on-one clash of a pitch sequence, the threat of a baserunner, the chess match of a managers’ struggle, and the machinations and manipulations of a defensive shift – that only a simpleton is unable to grasp the layers of tension building with every subsequent pitch.

With respect to the great Mr. Smith, though, jaw-dropping speed really is the most exciting attraction that baseball can offer:  the speed of an Aroldis Chapman fastball, the speed of an unleashed Billy Hamilton, the speed of a Miguel Cabrera line drive zooming over the outfield fence. Ask any fan, casual or avid, and you’ll learn that baseball’s greatest plays transpire at full sprint, whether a straight steal of home, a game-saving catch, or an inside the park home run.

On Monday night, we were introduced to a different sort of speed, thanks to new Philadelphia Eagles head coach Chip Kelly.  The Eagles ran their offense with an urgency that pressured the defense, hurried the announcers, and left fans breathless (particularly those fans who were unfamiliar with Kelly’s offenses in the collegiate ranks at New Hampshire and Oregon).

Baseball finds itself chasing football in popularity and ratings as it is. Should Kelly’s offense catches on, the national pastime may well fall further behind. Subtle storylines and grinding, tense machinations are no match for up-tempo play.

Consider basketball: John Wooden installed a fast-break offense at UCLA in large part, the Wizard of Westwood explained, because it was an attractive style of play and thus garnered fan support and attendance. Wooden was very concerned with drawing, increasing and pleasing his fanbase. Decades later, the most exciting offense in the NBA belonged to Magic Johnson’s Showtime Lakers. Today, LeBron James both dominates and entertains with an aggressive, attacking style that pushes the pace.

Consider hockey: When the successful New Jersey Devils bogged down the 1990s NHL with a stifling, trapping style, the league installed new rules with the sole intent of opening up the game and increasing offense. The rules worked; the new NHL weeded out the players who weren’t fast and/or athletic enough to keep up, the pace and rhythm of the game increased, and now the sport is filled again with creative, high-flying talents able to create a highlight-reel goal within the slimmest opportunity.

Good baseball teams, however, drag the pace to a crawl. Why?

1. A good batter is a batter who works deep counts, sees more pitches, fouls off pitches he cannot hit, and will draw a walk with pride. Good batters will battle through longer at-bats.

And so here we are, with more pitches, more pitchers, more time between pitches and very little pace at play.

In the NFL, Chip Kelly’s Eagles need not to wait for the defense to set up before they snap the ball and run a play. They merely have to wait for the referee to spot the ball and signal that they may begin the play, and off they go. In the NBA, a basketball offense need not wait for the opposition’s defense, either. When the referee makes the ball ready for play, they may immediately inbound and go about their sporting tact. In the NHL, when the puck is dropped, there is no waiting around. The game is on, whether both teams are prepared or not.

In Major League Baseball, the pitcher cannot throw the ball as soon as the home plate umpire wings it to him. That’s a “quick pitch,” and it’s illegal. No, the pitcher has to wait for the batter to ready himself in the batter’s box, both feet firmly dug in, followed by the umpire’s gesture to proceed.

Even with the batter and umpire both waiting on him, the pitcher need not do a thing with the baseball. Did the batter call time? Is the pitching coach on his way to the field? Does the first baseman want to visit the mound? Does the pitcher even want to pitch, or would he rather step off the rubber, take off his cap, wipe away some sweat, walk down off the mound, play with the rosin bag, ascend the mound once more, stare in for his catcher’s signs, shake off three signs in a row, and call the catcher out to the mound to confer?

Baseball’s appeal may be hamstrung by its pace – but it is a pace that is nearly certain to continue. There’s not much we can do to talk hitters into forgoing walks and fouling off tough pitches, for one thing. It would be unwise to legalize quick pitches; imagine a game in which the on-deck hitter came walking up toward the batter’s box… only to be greeted by a fastball sizzling in while he’s still trying to dig his way into the box. You could install a pitch clock to determine how long it took between a hurler’s deliveries, perhaps. Several years back, Minor League Baseball did attempt to call strikes on hitters who stepped out of the batter’s box after taking a pitch, but the experiment turned into a disaster and was soon scrapped.

So what can be done? At the moment, nothing. The truth of the matter remains: Baseball games are slow and getting slower, and Chip Kelly and the NFL aren’t waiting around.

Save us, Billy Hamilton.