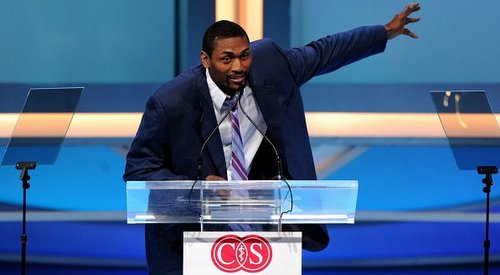 The offseason can sometimes be the most dangerous part of the year for any professional athlete. Not because of any injury risks, though. You see, pro athletes are young, wealthy, and, once the season ends, often find themselves with a lot more free time than they are used to. Unfortunately, that can lead to trouble for some players. The NBA has certainly not been immune to this phenomenon over the years. This summer in particular, young players like Jared Sullinger, DeAndre Liggins and Royce White have all found their names on the police blotter.

Additionally, the ongoing summer activities of players like J.R. Smith and Lamar Odom continue to grab headlines (if you’ve followed TMZ at all over the past few weeks, you’re intimately familiar with every step of the ongoing Lamar Odom saga). You can’t blame TMZ or other sites, though. Those stories rack up the page views. Everyone loves to watch a car wreck, and even more than that, everyone loves to say “I told you so”. When J.R. Smith violates the NBA’s anti-drug policy, it gives all NBA fans the opportunity to exclaim, “Look at that knucklehead Smith, I knew he would screw up, he always does”.

Saying those things serves little more purpose than to nurse our inferiority complex as fans. For the most part, NBA stars are younger, wealthier, and more fit than most people watching them play ever will be. Despite those realities, however, when a player gets arrested or suspended, it gives us an opportunity to flaunt our “moral superiority” over him. It’s the same reason people stereotype jocks as dumb. Athletes are already in better shape than us, and often making more money. What advantage do we “non-jocks” have if not in the brains department?

For all those reasons, it’s both fun and satisfying, to revel in, and encourage, continued failure for troublemaking athletes. Think about it. No one ever said, “That John McEnroe is actually a pretty nice guy. I think he’s going to chill out one of these days”. Or “John Rocker will turn things around. He has a good heart”. No, when these “troubled” athletes pop up in the news, all we hear is about how they represent the worst of the sport, how they are a disgrace, and how they always will be.

In this way, the media exploits these athletes and their tragedy for gain (in the form of page views, subscriptions, etc.), likely worsening their situation in the process (think about your most recent life misstep: now imagine you had to undergo that exact experience with an entire nation of people dissecting and criticizing your every move. Could that possibly have helped matters?), and then moves on to the next target as soon as the well runs dry. Furthermore, many of those same pundits then don’t have the good grace to revisit or to praise the objects of their scorn when they actually make a recovery, or improve their lives.

Case in point: Ron Artest (or Metta World Peace). Metta World Peace is a player who spent years being reviled by the media as a thug. He has a rap sheet that would make John Dillinger jealous: the Malice at the Palace, the locker room Hennessy incident, domestic violence charges.  He has been suspended for a variety of offenses ranging from elbowing opponents, to destroying TV cameras, to asking for time off to promote a music CD. His history of erratic behavior also includes applying for a job at Circuit City (while under NBA contract) and practicing in a bathrobe.

Add it all up, and a summer of misconduct by a player like Odom pales in comparison to nearly a decade of questionable behavior by his fellow Queens product (and childhood friend) Peace. Nonetheless, the player formerly known as Artest has managed to turn his career (and his life) around. How often do you hear about that? During the peak of his “bad boy” days, Peace was popping up in the news seemingly every week. These days, you rarely hear about him unless it’s a blurb about some weird thing he tweeted (my personal favorite being the time he trolled Lakers fans prior to being amnestied).

The fact is, though, Peace should be in the news this summer instead of Odom or Smith. We should celebrate a man changing his life for the better instead of wallowing in the misery of others. World Peace won the J. Walter Kennedy Citizenship Award in 2010. That year, he donated a portion of his salary to various charities related to mental health advocacy. He auctioned off his championship ring to raise $650,000 for the same cause. He has also worked as a member of the Mental Health in Schools Task Force to generate more government support for mental health issues.

All the while, World Peace has continued to promote music, make some occasional hilarious forays into the entertainment world, and contribute on the court as well. In other words, the man has rehabilitated himself and his image. And he isn’t the first. Players like Stephen Jackson and Chris Andersen have recovered from mistakes earlier in their careers to become respected, functional members of winning NBA teams. Others like Delonte West are still waiting for another chance after past transgressions.

I’m not here to claim that every player mentioned in this article will develop into a model citizen. Unfortunately, some of these players will likely never outpace their demons. And I’m not here to excuse anyone for illegal actions. The punishment for such offenses is for the law to decide, not us.But the fact is, most of these players are simply young people (average age of Sullinger, Liggins, White, Smith, and Odom? 26 years old) making the same mistakes that many young people do, simply on a bigger stage. They may put on a jersey to go to work, but they are people, and however tempting it may be to vilify or condemn them,we should instead seek understanding and to forgive, the same way we would with a family member or an acquaintance.

The next time the resident wild card player on your favorite (or least favorite) team “screws up”, take the time to think about this: what if, instead of a professional athlete, it were your son or daughter? Your brother or sister? How would you react then? How would you want everyone else to react?