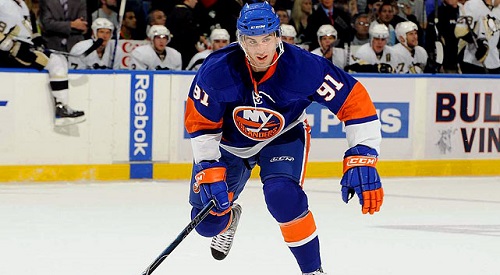 The Rebirth of the New York Islanders

The New York Islanders are showing everyone what kind of team they have the potential to be in the near future.

With the exception of Game 1 when the Islanders were blown out of the CONSOL Energy Center by a final score of 5-0, they have matched the Pens goal-for-goal and outshot the top-ranked team in the Eastern Conference 78-58 in Games 2 and 3. If they were playing against any other team, they could easily be leading the series, but the Penguins have an innate quick-strike ability reserved for only the finest collections of talent assembled in the world’s greatest league.

They opened Game 1 by scoring just 3:30 into the first period then scored twice in 32 seconds early in the middle frame. In Game 2 they scored twice in 2:36 to grab a 2-0 lead less than three-and-a-half minutes into the game and, down 2-0 in Game 3, they netted two goals in 19 seconds and three in 5:42 at the end of the first period to take the lead. But the Islanders are showing that same cobra-like striking ability, recording two goals in 5:25 to tie Game 2 and twice in Game 3 they recorded two goals in under five minutes before ultimately losing in overtime after giving the Penguins a power play.

Their star players are showing big-game potential as John Tavares, Kyle Okposo and Matt Moulson have all scored big goals in this series to either tie a game or take the lead. The Islanders are also one of two teams, St. Louis the other, with two players in the top 10 in hits so far in the postseason. Overall, they are fifth in hits with 107 and second with 26 take-aways showing they can be tough against teams better than them on papers and in the standings.

The Isles weren’t given much of a chance at the beginning of this year after averaging just over 74 points in the past five seasons, but they have a solid group of forwards to build their team around. From the scorers to the grinders, every player knows his role and, most importantly, they can all skate. In 1980, Team USA upset the powerful Soviet Union because they were able to do what no other team could, go stride for stride for 60 minutes against the most conditioned team in the world. Now that isn’t to say the Islanders are definitely going to upset the mighty Pens or that it will be nearly as big a story if they do, but it shows a bottom seed that can skate can easily match a powerhouse team. Barry Melrose has more on how the Islanders’ collective skating ability is keeping these games closer than many predicted:

The Islanders are making this a tighter series than expected because they can skate with the Penguins. If the Pens end up winning this series, we’re seeing that skating with them is what teams are going to have to do. The Penguins aren’t used to playing teams as quick as they are, and that’s why the Islanders are having so much success. The Isles are every bit as quick as the Penguins, which is something that doesn’t happen too often.

One of the questions going forward for the Islanders is goalie Evgeni Nabokov. At 37, it’s hard to imagine him being the go-to guy in net when the rest of the team is fully mature and ready to take a serious run at the Stanley Cup. Then again, it’s not uncommon to see goalies play well through the time they turn 40, so it’s entirely possible he can do so as well. After all, his .910 save percentage and 2.50 goals-against average this regular season were just slightly below his career averages of .912 and 2.41 and those numbers come from playing behind some very powerful San Jose Sharks teams.

Last season the New York Rangers, Penguins, Philadelphia Flyers and New Jersey Devils all had over 100 points to take the top seed as well as the fourth, fifth and sixth spots in the Eastern Conference while the Islanders finished with 79 points to finish 14th. This season they finished above the Stanley Cup finalist Devils and the Flyers who have been dominating them in head-to-head performances in recent years and finished just one point behind the Rangers who had the top regular season record in the conference last season. They are building and gaining momentum and by the time they move into the Barclays Center in Brooklyn for the 2015-16 season they’ll be a force to be reckoned with.

The Penguins, Boston Bruins and Los Angeles Kings have all won recent championships after years of toiling at the bottom of the standings and lost in the first round of the playoffs the first time making it back to the big dance. The Chicago Blackhawks made it all the way to the Western Conference Final in 2009 after making the playoffs just once in 10 seasons, but few rebuilding teams have that much success that early. But this is experience for the Islanders as they are getting a first-hand look at what it takes to win once the weather gets warmer and their play in Games 2 and 3 should bring a lot of confidence to a long-suffering fanbase.