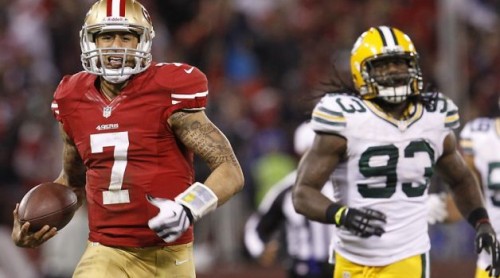 Breaking down the zone read, a key San Francisco weapon

The NFL has sometimes been criticized for featuring less offensive innovation and diversity than other leagues, but that’s starting to change. We’ve seen plenty of unconventional looks across the league this year, including the spread of the pistol formation and various forms of option-based offenses.

From Cam Newton to Robert Griffin III to Russell Wilson and Colin Kaepernick, many of the NFL’s most exciting young quarterbacks are frequently running systems and schemes that haven’t been seen much at this level, and they’re finding great success in doing so. One of the most intriguing elements that’s shown up to some extent in most of these new attacks is what’s known as the zone read (or the zone-read option). It’s a concept that’s relatively new to the NFL, but one that’s been used successfully across many other levels of football, and one that could be a key weapon for Kaepernick’s San Francisco 49ers in Sunday’s Super Bowl clash against the Baltimore Ravens.

At its most basic, the zone read is based on a simple decision by the quarterback: give the ball to the running back or keep it himself. This is usually based on reading what one unblocked defensive end is doing; if the end stays in place to defend the outside, then the quarterback gives the ball to the running back, who then bulldozes inside, but if he’s crashing down on the running back, then the quarterback keeps the ball and rolls outside into the vacated space. That often leads to a run for big yardage. For a stellar example of this, check out what Kaepernick did against the Packers in the playoffs a couple of weeks ago:

What’s interesting here is that this is a frontside read (of the outside pass-rusher to Kaepernick’s right) rather than the traditional backside read. The execution is exactly the same, though. That rusher (#93, Packers’ linebacker Erik Walden) is coming inside hard to try and stop 49ers’ running back Frank Gore, so Kaepernick pulls the ball back from the handoff to Gore and instead takes the ball outside himself into the space Walden has vacated. In its most basic form, this isn’t a terribly complicated play, but it’s one that can be highly effective.

There are ways to stop or limit the zone read, including the scrape exchange (essentially, the end crashes to make the quarterback keep the ball, but a linebacker loops over to fill that end’s spot and take away the pivot’s running lane), but it’s notable that teams have come up with innumerable variations on the basic zone read that can help counter those methods of defending it. From Carolina’s sweep reads and inverted veers to Chip Kelly’s combinations of inside zone reads and zone-read triple options to zone-read plays that focus on giving the quarterback multiple passing options to quadruple options that include several running options and a passing option, there are numerous variations you can pile on top of the basic zone read to make things even more difficult.

Here’s a 2009 video (via Chris Brown) of the CFL’s Calgary Stampeders running a quadruple option; quarterback Henry Burris keeps on the initial exchange with running back Joffrey Reynolds (option #1), rolls out and elects not to run it himself (option #2) or throw to the flat receiver (option #3), but instead hits the deep receiver (option #4) for a substantial gain.

The usage of the zone read in the CFL is particularly notable. Over the last decade in particular, it’s become a staple of most teams’ offenses, to the degree where you’ll see plenty of zone-read looks in just about every CFL game. What’s notable is that the CFL’s zone-read plays tend to focus more on passing options than running ones for the quarterbacks, though. Part of that’s probably because of the greater emphasis on passing in a three-down, 12-a-side game with a bigger field, but another part of it is because the current breed of CFL starting quarterbacks (with a couple of exceptions) aren’t really known for their rushing ability. What makes that perhaps a revelatory sign of where the NFL may be headed? Well, it shows that you don’t need a quarterback with the rushing skillset of Kaepernick, Wilson, Newton or Griffin to include some elements of this scheme. At its essence, the zone read is about taking a defender out of the play by having him focus on the wrong man; that’s a valuable concept regardless of who your quarterback is.

When you have a quarterback like Kaepernick, though, the zone read becomes an even more potent weapon. Kaepernick is such a threat with his legs that the 49ers were using him in some zone-read looks even while Alex Smith was still their starting quarterback, and San Francisco’s decision to bring in the Pistol formation (invented by Chris Ault, Kaepernick’s coach at Nevada, and used to great effect by other NFL teams like Washington) has amplified his abilities even further. The Pistol essentially lines the quarterback up partway between a traditional under-center look and a full shotgun and puts the running back directly behind him; that gives the quarterback better position to run himself, but also enables the running back to run to either side.

With the basic read option, the Pistol and the other wrinkles the 49ers have added, San Francisco forces opponents to worry about containing Kaepernick in the ground game, and that not only opens up the passing game, it also frees up space for running backs like Gore and LaMichael James. The innovative offensive looks the 49ers have brought in, particularly the read option and the wrinkles based off of it, make them a formidable adversary, and they may well lead the team to a Super Bowl victory.