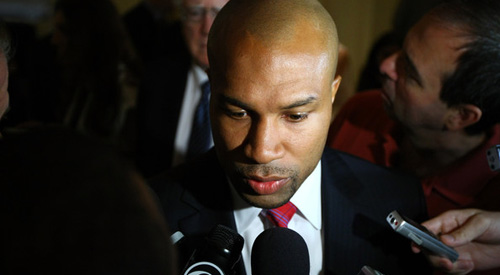 My relationship with the NBA. It’s complicated

Sociologists are quick to assume that young people these days have lax attitudes towards their relationships. I, personally, would say the opposite is true and argue that what may seem to be casual relationships to some are rather brimming with passion.

The complexities of my own multi-year relationship with the NBA serve as a case in point.

While basketball and I have been at times very close, sometimes I inexplicably leave for years on end without so much as a viewing during the playoffs. When I come back, however, I’m quick to jump in bed with my former NBA mistress, anxious to spend time with its curious mix of intimidating athleticism and managed personae. I find myself often overwhelmed, in awe, talking about small details from games to people with no actual interest in the sport, thus eventually shuttering myself indoors to watch games and highlights alone. Sitting in the glowing darkness with alcohol and snacks, I scream at the television.

A quick primer on my nearly two-decade relationship with the NBA: I was born in 1985, one year after Michael Jordan was drafted. By the time I could think for myself and develop a liking for some things more than others, I played sports. Eventually, the only sport I played to any competitive level was basketball.

My interest in the NBA took form as I started shooting hoops in my driveway and sought someone to emulate. I often jumped around in the driveway with my tongue out, wearing my dad’s tank top, draining nine-footers. When winter pushed me inside I watched the NBA more than any other league, including the NHL, which I’m forever genetically-linked to by birth as a Canadian male.

I read SLAM routinely and made a point of watching NBA Inside Stuff on Saturday mornings. I bought the NBA Live series for years on end (or more appropriately, had it bought for me), painstakingly customizing whatever I could, immersing myself in the players’ names and numbers. I am still, to this day, unstoppable at NBA Jam for Sega Genesis, and yearn for Shawn Kemp’s Reebok Kamikazes more than anything I’ve ever known. My earliest memory of sports spectatorship is watching the infamous Knicks vs. Rockets Game 5, conveniently (and confusingly, for a nine-year-old) interrupted by OJ Simpson’s car chase.

Suddenly, despite still playing and loving the sport, I stopped watching NBA games. There is no particular reason, really, just smaller interests taking precedent at a vulnerable time in a young life. As a teenager I found a lot of other things to do. Some of those distractions were other sports, but mostly other kinds of activities teenagers enjoy doing: trying to talk to girls, talking to other young boys about the possibilities of talking to girls.

When I cared to notice basketball, I hedged my small amount of attention on Allen Iverson and Vince Carter’s Raptors, then had the delight of one become a pariah and the other a leper. During the height of the Shaquille O’Neal and Kobe Bryant feud, as well as the blossoming of Kevin Garnett, Steve Nash, and the 2003 class into superstars, every year my basketball interest would peak during March Madness and I’d find myself out of the loop in terms of the NBA’s current superstars and personalities.

I’m reminded of my tumultuous relationship with the NBA when I hear the kind of news I’ve been hearing lately about the on-going labor negotiations: in that, both sides are so far apart they feel there is no need to talk, followed by continued posturing on both sides, followed by an ad-hoc letter from Derek Fisher, head player rep of the NBAPA, that largely said nothing.

These last few years my relationship with basketball has been good. I’ve paid more attention to the NBA and it rewarded me with new storylines, Decisions, an amazing playoff run and a new generation of superstars that I can tweet at. Then it skipped town and is threatening to never come back, so here I am alone, and in my desperation cuddling up to the NHL on cold weekday nights and going at it fierce with the NFL on Sundays.

You’re my boo, the NBA, but if there is nothing to tune in to I won’t be waiting around.

You could say I have really high standards for what I get from the NBA as a fan, but most fans of the NBA understand the basics of what is wrong now (the players want too much and need shorter contracts, owners need to share and possibly ditch two franchises) and don’t want all this last minute drama. The NFL just ended its lockout in a huff. Like that … voila! To end it they stiff-armed the NFLPA into signing a deal in typical “here it is, now sign it” fashion, and it’s a great deal for the owners over the players.

On a 16-game schedule, the NFL’s ability to make revenue is significantly more dependent on a single game, hence the desperate need for both sides of the NFL to not miss even a single preseason game. They didn’t un-due decades worth of work by the player’s union, but they also didn’t overpay them. Concessions on both sides, necessary fixes made, nothing no one didn’t predict. It was this need to decide that made the NFL players take the offer that was on the table, and strategic timing from very adept NFL owners at making them decide when they did.

The NBA issue is more complicated than “how we split $9 billion dollars” and actually has repercussions towards the financial viability of many of its teams to simply exist. NBA players are more likely to hold out because of how good they have it now and how much they are likely going to lose, but without them budging in some significant way there simply won’t be a deal regardless of how the owners-side negotiates within itself. From what I hear, the owners seem to have some issues of their own.

Both sides seem willing to sacrifice 20 to 40 games throughout the regular season and still bank on the very-profitable playoffs, in their mind leaving only an asterisk and not a gaping hole in the official records. But fans of the NBA are different, and we have taken notice.

Like baseball and hockey fans, basketball fans immerse themselves in a season that happens seven days a week instead of once every seven days. Now, like the lost generation of bro basketball fans of which I was once a fleeting member, sports media will fill the void easily and casual fans will find new ways to entertain themselves.

Hardcore NBA basketball fans will be hung out to dry, scoping out rogue feeds of Eurobasket games from nefarious European sources and devoting their attention to an NBA-diluted NCAA men’s basketball product.

In much the same way that core Canadian and smaller, key American audiences kept the NHL afloat during a very difficult post-lockout wake-up call, the NBA will be kept afloat by its core audiences throughout the US. Although Gary Bettman is ready to help the NHL rake in the profits left over from a locked-out NBA, the amount that the NHL suffered over its own lockout – however necessary in the long term – is not to be ignored.

The chance for the NBA to be as popular and culturally fundamental as the NFL is there. In fact, with the more global appeal of the NBA given the significant growth of basketball internationally, it could even grow into something bigger than the NFL.

Comparably, the NBA could be basketball’s version of the English Premiere League, only with all of the top teams and all the global attention. The recipe for soccer’s international popularity – all you need is a ball and a net, multiplied by 7 billion – is the same for basketball.

But, before it goes global, the players and the owners need to find a way for basketball to work in North America.

And the NBA, I really do miss you. Already.