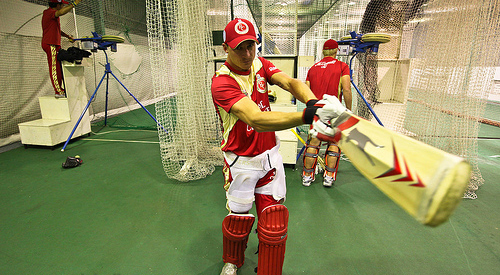 A major global sporting event begins this Saturday in South Asia. Co-hosted by India, Pakistan and Bangladesh, the 2011 Cricket World will captivate millions of people across five continents for the next six weeks.

Historically, Canada versus the United States is the oldest fixture in international cricket. The first match between two opposing countries took place in September, 1844 at St. George’s Cricket Club in New York City.

A stereotypical complaint about cricket is that it is boring. While the biggest teams in the world frequently play matches that last five days, for World Cup purposes, a one-day match format is used.

Canada won the two-day match by a score of 144 runs to 122 runs, a total number of runs that would be more suited for a monthly total in baseball. For a North American to understand the game of cricket as a beginner, baseball comparisons are actually quite appropriate.

In baseball, each team takes turns batting after three outs. For cricket, each team gets one turn and they go until all 10 players are out. In the interest of time, 300 balls are bowled (pitched) in 50 sets of six, called overs.

Two players go up to bat at any given time, standing in the center of the oval (the playing surface of similar shape). The batsmen (batters) stand 22 yards apart from one another, each at one of the two bases. These are the only two bases and the players run back and forth in opposite directions to each other to score runs.

The defending team’s bowler (pitcher) runs and bowls the ball, bouncing it one time in the space between the wickets. The goal of the bowler is to hit the wicket; the three wooden stumps that collectively stand 28 inches off the ground, nine inches wide.

Once the bowler bowls, the batsmen have to protect the wicket. If the ball hits the wicket, it’s a strikeout; that batter is out of the match. If the batter hit’s the ball and the opposing team catches it in the air, the batsman is out. If the batter hits a ground ball, he and the second batsman run, usually once or twice between the wickets, each time they reach the other wicket counts as a run. If the runners are caught in between the wickets, the defending team can throw the ball to hit the wicket stumps resulting in a force out. No tagging is needed.

The first team batting sets the number of runs required to win (top of the 9th). The the other team does not score more (bottom of the 9th), they lose by point differential. If they do surpass the set total, they win by the number of wickets they had left.

That is a plethora of other rules and oddities, but those are the basics. Check out a cricket match and then come read this again and things will make a bit more sense.

Some of the stars to watch out for include Dale Steyn, the South African bowler from the small mining town of Phalaborwa. He is amongst the game’s best and in the prime of his historic career, which includes the third highest strike rate (frequency of outs). He is cricket’s answer to Roy Halladay.

Another bowler of significance is Latish Malinga of Sri Lanka, whose unorthodox delivery is one-of-a-kind, with unpredictable and radical movement, similar to a Tim Wakefield knuckleball. Now imagine Tim Wakefield throwing his knuckleballs with heat. Malinga is the only man in any form of international cricket to take four wickets in four balls (four pitches, four outs).

On the batting side (chicks dig the long ball, even in cricket), the big man from the West Indies is Chris Gayle, a powerful figure standing 6’2″. He is one of the most feared batsmen in the tournament. Think Albert Pujols.

On the smaller side, Sachin Tendulkar from India resembles Ichiro; frequently regarded as one of the best ever and the all-time leader in runs scored over a 22-year career that began when he was 16 years old. Number two on the all-time runs leader board is Australian captain Ricky Ponting. At the twilight of his career, he has always been a fierce competitor and an on-field leader, much like Ivan Rodriguez.

One of the best all-around cricket players of all time is Jacques Kallis of South Africa who is the only player in history with over 10,000 runs scored and 250 outs. Imagine if Derek Jeter was from Cape Town.

This may be some countries’ last shot at World Cup glory. The International Cricket Council decided to trim the 2015 tournament from 14 teams to 10 following a debacle in the 2007 World Cup. Pakistan was upset by Ireland in the group stage and then India fell to rival Bangladesh, meaning both powerhouses (with some of the largest fan bases) did not qualify for the second round.

Fans of cricket’s largest supporting countries led a mass exodus from the West Indies and viewership dropped significantly, not to mention one of cricket’s biggest rivalry matches not happening. Instead of encouraging the development of smaller nations, the ICC has trimmed the number of entrants going forward and reduced the possibility of David defeating Goliath in the future.

If you are a cricket newbie, you’ll probably be hesitant to shell out $199 for the entire tournament package on TV. However, the wonders of the internet will allow you to visit Crictime and view the matches at your own (costless) convenience.