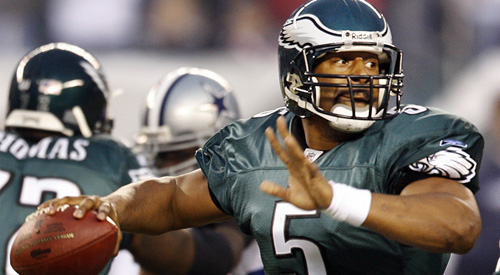 Every now and then the stars align above bustling Philadelphia and the seas of a luckless city’s toughest competition gracefully part in order to allow the consummation of karmic redemption.

Whether it be a New York Mets baseball club crashing to the National League finish line like an alpaca with a broken tibia, or the entire NFC conference simultaneously wetting the bed in the final week of their 2008 season, the oft-neglected town has recently been the grateful recipient of some uncharacteristic good fortune.

Let’s get this straight, for over 25 years the City of Brotherly Love was the only place in North America with four major franchises and zero championships. Nowadays it finds itself on the friendly end of two consecutive late-season collapses that resulted in the shuffling of their respective sport’s post-season picture.

When the underappreciated 2008 Phillies knocked off the Tampa Bay Rays in October’s World Series it marked the first time since 1983 that Philadelphia fans would have good, old-fashioned reason to riotcelebrate. What’s easy to forget, however, is that, until late September, the Phillies had yet to solve a New York Mets team that led the NL East for the bulk of the season.

On this most recent Sunday morning, Donovan McNabb and the rest of the Philadelphia Eagles woke up with little to look forward to but an early vacation. A pair of big breaks, several hours and 44 points later, however, and the dust had officially settled on the NFC playoff picture with Philly on the inside looking out.

Although the collapse of the Bears, Cowboys and Buccaneers on Sunday paled in comparison to that of the Mets’ last fall, it’s hard to imagine the odds of all three of them folding in Week 17 were anything close to favourable for Philadelphia. They tied against the Bengals for goodness’ sake.

With a first-round match up against the defeatable Minnesota Vikings in store for the Eagles next weekend, fans of the otherwise cursed city will have their second opportunity to root for a legitimate post-season threat in less than three months. Is it early too suggest that things are looking up for a city that, prior to 2008, had every reason to look down?

Although much still stands between the Eagles and a national championship, the parallels between the city’s football and baseball teams is hard to ignore. The unfolding of fate in the leagues around them? Even harder.

Simply put, the late season rallies by the Phils and Eagles could be just as easily attributed to on and off-field management as they were to any karmic redemption, but the fact that, in both cases, their divisional competition slowly crumbled and fell away too, speaks to something more.

No general manager in Philadelphia or anywhere could have planned to capitalize on the foibles of their opponents more conveniently and nowhere would it be reasonably expected, yet here it happened after exactly 100 seasons without a championship. Coincidence? I think not.

Provided the Eagles can appease the sporting gods with at least an upset victory over the Vikings on Sunday, the 76ers might approach their own Eastern Conference hunt with a touch more confidence. An ungrateful loss, however, and fans in the City of Brotherly Love may as well consider rationing their faith for another painful drought.