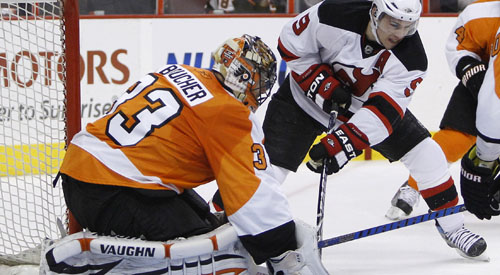 When the NHL playoff match-ups were determined in the closing hours of last Sunday, there was a collective hustle to media outlets by fans of the coolest game on earth in order to see who officially fit where in Lord Stanley’s shuffle.

All but one spot was determined coming into the day, and it was to be determined by an Atlantic division clash between the Philadelphia Flyers and New York Rangers. Unfortunately for the Rangers and their faithful, their season was halted at 82 games.

The victory pushed the Flyers into the seven-spot and a date was set with the second seed in the East, the New Jersey Devils.

But once the regular season ends, the slates are wiped clean and the reliability of predicting the Sharks to win game-in and game-out stops. And then the overall contemplation over who will take hockey’s most valued prize begins. It is also the time where the Broad Street Bullies go from nasty to even nastier.

With the nastiness label aside, it must not be forgotten that the Flyers were picked by numerous experts, including Senior Writer of The Hockey News, Adam Proteau, to take home the Cup this year during pre-season predictions. They weren’t picked because writers felt that Ray Emery would all of a sudden become the next Patrick Roy, rather they had a gut feeling that this team has what it takes to compete when it matters most and produce something memorable.

Their opponent in the Eastern Conference quarter-final is a squad who received a formidable addition at the trade deadline who goes by the name of Ilya Kovalchuk. The thought of the sixth-straight 40-plus goal-scorer streaking down the left wing with nothing to lose is an image Peter Laviolette and his coaching staff will likely be grimacing about until the series concludes.

So let’s digress a little bit. What makes this series so special in a pack of eight first-round battles?

The answer is that it has potential to be a classic. The possibility of a seventh game in this series is the highest out of all first-round competitions, even with it being a second-versus-seventh battle. When you couple that with a plethora of past playoff performers on either side, it will be difficult to concentrate on any other series.

To add to it all, the two cities are less than 100 miles apart, meaning the Orange Crush of the Wachovia Center and the rambunctious Meadowlands folks may make an appearance in their respective visiting arena.

So, the scene is set up for an ideal upset, and if the Flyers can’t pull through, a hell of a fight will be put forth to try to make it happen.

The goaltending comparison, which is often seen as a predictor’s tie-breaking tool, is very lopsided considering Montreal’s finest, Martin Brodeur, is a Devil. However, with the leadership of Mike Richards and Chris Pronger, the Flyers won’t back down from any challenge. Their underachievement in the regular season means zip come the first puck drop on Wednesday night.

The Devils must be weary of the Flyer’s power play as they ranked third in the whole NHL during the regular season with a 21.5 percentage when a man-up. They also won the season series between them by a 5-1-0 margin.

The Devils deserve respect, however, as they bolstered the lowest goals-against total in the regular season, gathering up the Jennings Trophy. Don’t expect Philly to go on a scoring spree with Colin White and Paul Martin patrolling the blue line.

Nevertheless, the series will come down to Philly’s ability to capitalize on the few chances that New Jersey gives their opposition per game. If they can shut down the big-two in Zach Parise and Kovalchuk, then 3-2 and 2-1 victories could be theirs as Pronger and Brian Boucher look poised to lead the defensive end of the Flyer’s game.