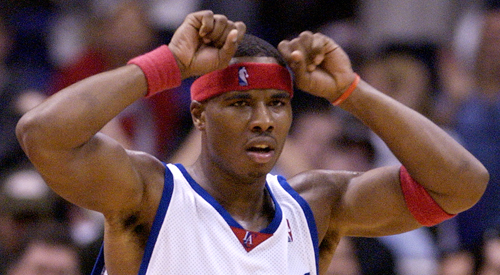 Ahh, to be overpaid in a bad economic climate; to be one of the most valuable chips in your entire profession while holding only average tangible performance value; to be equally desired and reviled, sought after and shopped around; to be Quentin Richardson.

Q-Rich has had quite the summer. It really seems to be one of those “lonely in sports” phenomena – after all, what good or service could conceivably be traded four times in a span of 50 days? Would such a string of trades not signal to the marketplace a serious defect with the good in question? Or would it not, at the least, bid up the asking price for such a commodity? After all, he was sold four times and bought four times – there must be some message inherent in such a trading spree.

There seems no business or economic equivalent to what Richardson went through this summer. What else can you think of that draws almost the entirety of its value from the fact that it is unreasonably expensive? What else exists that draws its value from speculation that someone, somewhere down the line, may pay you slightly more for the right to speculate on a future return than what you paid to speculate this time?

The obvious answer is the stock market, though I’m unsure the rationale behind the Q-Rich trading is the same. While stocks are traded hoping for greater future returns (things like dividends and capital gains), Richardson was traded with a shrug and a “maybe we’ll use him, maybe someone else will want him” attitude. It seems unlikely that a GM posited that they could trade Player X of Value Z for Richardson, and then later trade him for Player Y of value Z+1. It would be quite a long shot to speculate on the NBA trade market in such a way, especially in such economic times. After all, $9,352,500 is quite a price for a speculative addition that may only offer minimal returns. Financially, it is all risk for very little reward.

Again, this brief analogy ignores the on-court value of Richardson. While he is a strong offensive player who has never struggled to score, he is one-dimensional and performs on the offensive end at a rate much less efficient than others at his position (his PER for 2006-2008, in order, was: 11.62, 8.72, and 14.30). And while one of Richardson’s greatest talents is valuable (he is a career 35.4% three-point shooter), it is one that is rather abundant and can be found for far cheaper than $9.5M.

Regardless of the reasoning, business-related or basketball-related, Richardson has had quite a wild summer. Starting in the Big Apple, Richardson was dealt by New York to Memphis for Darko Milicic, then dealt by Memphis to Los Angeles (Clippers) for Zach Randolph, then traded by the Clippers to Minnesota for Sebastian Telfair, Mark Madsen, and Craig Smith, and finally sent from Minnesota to Miami for Mark Blount.

Four trades, five teams, for six different players. Those transactions are a veritable role call of bad draft picks and bad contracts, too, so it seems as if the trades were rarely rooted solely in basketball decision making.

Milicic is a former second overall pick that Mike D’Antoni thinks he can recreate in a high-tempo offense, so the first trade made some basketball sense. However, Richardson would have been an awful fit in a rotation that already employs O.J. Mayo and Rudy Gay.

So Memphis shipped him out for Zach Randolph, a player who has All-Star talent but a waiver wire attitude. Z-Bo is inconsistent, allegedly unmotivated, and is as one-dimensional as Richardson. Still, he has upside and is a good fit with Memphis, though they could have gotten better (Carlos Boozer) or cheaper (David Lee, Paul Milsap) options. So Richardson returned to the Clippers, where he enjoyed some success and once made a cameo in Van Wilder with his other teammates.

But it wasn’t to be a second time around, and Richardson was curiously sent to Minnesota. Telfair makes sense for the Clippers, as a former lottery pick that was supposed to have superstar upside, Madsen is a salary throw-in, and Smith is a solid rotation player at a position the Clippers are stacked at. Again, questionable, but the deal got done and Richardson made his final move of the summer.

And now Richardson has arrived in Miami. He claims to be great friends with Dwyane Wade and says the two have longed to play together for many years. If this is true, then it’s a great pick-up by the Heat – when filling out your roster, it’s always smart to pull a Colangelo and load up on friends of your stars (see: Ford, Jack, Belinelli). Richardson also fits in a pretty thin guard rotation, and should help space the floor for D-Wade. At the same time, Mark Blount is the NBA equivalent of a casino marker – he is simply something tangible to attach a dollar amount to, though the marker has no value itself.

And so Richardson’s roundabout summer appears to be over. If he were a normal person, those 50 days would have been incredibly stressful. As it is, Richardson probably didn’t buy or sell one house in reaction to the deals, due to a lack of time or foresight into his future. For a normal person, the cost of living is 32.5% lower in Miami than New York, but salaries are also 18.2% lower. Based on this alone, he would have been best off in Minnesota, where the cost of living is 39.7% lower than New York but salaries are only 9.9% lower. The move from New York to Florida is estimated to cost about $15,000. If Richardson were to have made every move, the total cost of moving would have been estimated at $69,000, ignoring any money he may have lost by rolling over so many properties so quickly in a poor real estate market. These are, of course, very crude estimates, but rest assured it was a stressful summer for Richardsonand I haven’t even explored the research and effort involved to uproot children from schools, something Richardson doesn’t have to worry about yet.

So now it’s September, training camps are around the corner, and Richardson holds a comfortable place on the Miami Heat roster with his pal Dwyane Wade. It took 50 days, four trades, six players, $60,000 in unrealized moving costs, a 32.5% drop in cost of living, and just shy of $40M in player salaries to get it done, but Quentin Richardson finally has a new home.