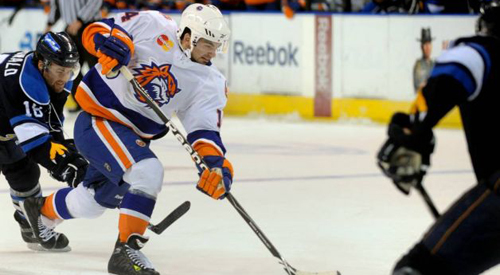 On October 16, 1985, Bentivoglio was born in the small city of Thorold, Ontario. 23 years, five months and 17 days later, Bentivoglio achieved his life-long dream when he played his first ever game in the National Hockey League.

The 24-year-old is in his fourth season in the American Hockey League and third with the Bridgeport Sound Tigers, the minor league affiliate of the NHL’s New York Islanders.

A Toronto Maple Leafs fan growing up, the 5’11”, 185-pound forward got the call that he was heading up to play for the Islanders last April.

“In the morning I went in for practice and the coach called me and told me that I was going up [to the NHL] to play,” recalls Bentivoglio. “Once I got the call, I just called my family and friends back home and as many of them made it down as they could.”

Growing up, Bentivoglio played his junior hockey for the Thorold Blackhawks. The young forward would go on to play for Niagara University, while simultaneously earning a degree in Accounting. In four seasons with the Niagara Purple Eagles, he tallied 132 points in 145 games played.

“The fondest thing is all the friendships you develop over the four years,” said Bentivoglio of his CHA career. “I think just the experience of going to college and playing with the same guys for four years and having those special friendships that you have for the rest of your life [was my favourite aspect].”

While wearing the jersey number 14 in junior and minor league hockey, the number 93 was important to Bentivoglio growing up, as he idolized former Leaf, Doug Gilmour.

“He’s a smart player,” said Bentivoglio. “He always made smart plays with the puck and he was always fun to watch.”

Bentivoglio signed with the Islanders on May 21, 2007 and scored 32 points in each of his first two seasons as a Sound Tiger. He played his first, and thus far only, NHL game on April 2, 2009, suiting up against the Montreal Canadiens. In the game, he earned himself over 11 minutes of ice-time and two shots on net.

“Just getting to the rink and being in the room with all the guys was great,” he said. “A lot of the older guys made me feel like it was just another hockey game.”

In retrospect, it was a lot more than just another game as a simple phone call allowed a small-town kid the opportunity to fulfill a lifelong goal.

“It’s huge,” said Bentivoglio of playing in his first career NHL game. “I think if you make the sacrifice and work hard then it eventually pays off for you.”

At the end of the day, Bentivoglio is just another kid who is playing the game he loves, eagerly awaiting the opportunity to make his much-anticipated return to the National Hockey League.

Whether or not he ever makes the leap again, he’s already done what 35,999 other kids haven’t, and that’s something to be proud of.