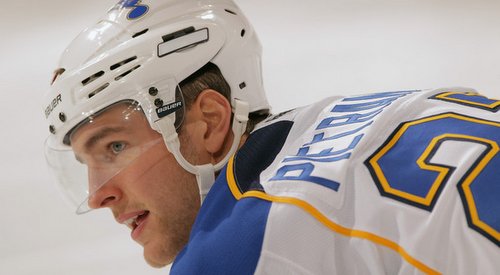 On paper, it would seem that the St. Louis Blues have all the necessary pieces to take home the Stanley Cup come June 2014. Fans and prognosticators both see plenty to like in the current incarnation of the team, with the latter becoming evidenced by publication The Hockey News’ preseason prediction of St. Louis besting Pittsburgh in the Stanley Cup Finals.

However, as those who follow hockey know, and have seen time and time again, having the (supposed) necessary pieces to make a championship run doesn’t directly correlate with winning titles.

When one looks at the St. Louis roster, it’s easy to see why they’ve become a trendy, popular pick to take home Lord Stanley. Indeed, I’ve given them plenty of thought as my own preseason pick to take home their first ever title (while I ultimately chose Chicago to go back-to-back for the first time since Detroit back in 1997-98). With skill, speed and size throughout the lineup, coupled with suffocating team defense, great coaching and plenty of options between the pipes, the inexact science of constructing a championship squad becomes seemingly elementary.

Yet, a closer inspection uncovers some deficiencies that have plagued the Blues for the past couple seasons that haven’t been rectified just yet. Chiefly, the Blues are known for their defensive system under coach Ken Hitchcock (known for holding players accountable when it comes to the defensive aspect of the game) something that has seemed to stifle their offensive output in the past.

A paltry 10 goals against the Los Angeles Kings in the first round of the 2013 playoffs suggests that scoring punch is something the Blues could still use an infusion of. Captain David Backes’ attention to the defensive intricacies of the game and physical play make him invaluable, and while he can contribute offensively, he isn’t in the upper echelon of point producers. Young winger Chris Stewart is much the same. In Patrik Berglund the Blues have a player who hasn’t reached his potential and needs to take the next step as of yesterday or he’ll have plateaued without coming close to reaching his potential. Ditto for T.J. Oshie.

Beyond the aforementioned, Derek Roy has proven he can score in the past, but expecting him to repeat his glory days as a Buffalo Sabre in St. Louis is wishful thinking. Alex Steen is responsible and consistent at both ends of the ice, but shouldn’t be lining up on the first line. Magnus Paajarvi is a former top draft pick of Edmonton who should round into a good player under Hitchcock, but his offensive upside isn’t massive in a St. Louis system predicated on a defense-first philosophy.

Youngsters Jaden Shcwartz and Valdimir Tarasenko both have a sizable amount of offensive upside, but seeing that realized while receiving limited ice time is highly unlikely.

The Blues lack an offensive game-breaker, someone who can change the course and outcome of a game with one flick of the wrist. Players like Phil Kessel and Thomas Vanek (while certainly hard to come by for many teams) are players with deficiencies, but players who can alter the fortunes of a team with one scoring opportunity. While it’s never good to rely on just one player to carry a team offensively, the Blues’ tendency to get it done by committee means they are without the offensive catalyst that can lift them out of an offensive slump, something that becomes important come playoff time.

The blue line is one of the most enviable in the league in St. Louis, led by star Alex Pietrangelo. Pietrangelo is everything a team needs and wants in a No. 1 defenseman, and is supported by the smooth-skating, steady if unspectacular Jay Bouwmeester, the improving Kevin Shattenkirk and physical veteran Barrett Jackman. Jordan Leopold and Roman Polak serve their purpose on the third defense pairing, while Ian Cole can step in and perform his duties without issue if called upon. So while the forwards have their deficiencies, the defense corps is about as good as it gets 1 through 7 and a major part of their success.

In goal, the trio of Jaroslav Halak, Brian Elliott and Jake Allen may not possess the reputation of the Lundqvists or Rinnes of the world, but they have done enough the past couple of years to keep St. Louis competitive. The question now is which one can ascend to the top and stake a claim to the No. 1 goaltending position. Halak seems to have issues with Hitchcock, while Elliott has been inconsistent since a spectacular 2011-12 season and Jake Allen may indeed be the future, however he’s untested having played only 15 career NHL games.

While every team has questions, for a team with such supposed Stanley Cup-winning talent the Blues seems to have too many questions and too little answers. They’ve yet to advance past the second of the playoffs in the past two years, and many of the questions that remained unanswered are the questions that have been asked the past couple of years, such as when will Berglund and Oshie turn into the players they were projected to be and help carry the team?

Other questions the team is sure to be sick of hearing is who will carry the load offensively when the offense dries up? Can any one of Halak, Elliott or Allen assume the responsibility expected of a starting goaltender? And of course, can the Blues finally beat Los Angeles (the Kings have knocked the Blues out of consecutive playoffs) when it matters the most?

While the team is no doubt a good one with depth and talent at multiple positions, the fact that the same questions are being asked year after year means that the team hasn’t done enough to adequately address their most pressing issues. Which, of course means that St. Louis will still be singing the blues come playoff time.