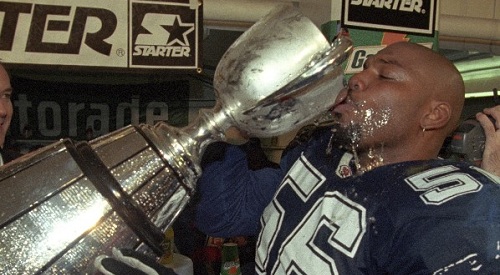 The American Stallion and the Grey Cup

The most cherished prize in Canadian football – the Grey Cup – is celebrating its centennial this month. Fans from across the country will make the pilgrimage to the host city, Toronto, to fill the Rogers Centre. As is custom, there will be parties, there will be adventures and of course, the Canadian Football League will crown its champion.

The Grey Cup has a rich history. It is a symbol that is just as recognizable as the maple leaf. But one year, the Grey Cup went south and that maple leaf was replaced by stars and stripes.

In 1995, the Baltimore Stallions became the first and to this day, only American team to win the Grey Cup.

The Stallions were part of the CFL’s expansion to the United States in the mid-90s. Originally, the team called itself the Baltimore CFL Colts, referencing the former National Football League franchise. But after the NFL filed a lawsuit, claiming trademark infringement, the franchise was forced go without an official nickname. Although they were referred to as “Baltimore CFL,” the team would eventually become the Stallions.

Most of the American CFL teams failed in their markets. But Baltimore was different.

According to the Canadian Football Statistics Database, the Stallions averaged more than 30,000 fans per game at Baltimore’s Memorial Stadium during their two years of existence. They had the highest average among all teams in 1994 and second highest in 1995.

They also succeeded on the field.

A glance at the CFL record book shows the Stallions amassing the highest winning percentage (.750) out of all the American teams. The combined record over their two seasons was an impressive 27-9.

They also succeeded in the playoffs.

Baltimore made it to the Grey Cup final in both seasons. In 1994, they narrowly lost to the British Columbia Lions after Lui Passaglia kicked a game-winning field goal on the last play of game.

The Lions had a huge home-field advantage as Vancouver happened to be that year’s host city. Fans inside BC Place Stadium erupted and Canadians exhaled. However, the Stallions would not be denied the following year.

Mark Stephen, play-by-play voice of the Stampeders and Sports Director at Calgary’s AM770, remembers a sense of excitement as Regina was hosting the Grey Cup for the first time. He also recalls the weather.

“Big story was the huge windstorm on game day that almost postponed the start of the game,” Stephen recollects.

Both teams sported identical 15-3 records. They were led by two of the CFL’s best coaches: Calgary’s Wally Buono and Baltimore’s Don Matthews. The Calgary offense was also quarterbacked by Doug Flutie, one of the most successful QBs in CFL history. Baltimore countered with Tracy Ham at QB and runningback Mike Pringle; two future CFL Hall of Famers, along with Flutie.

While the “Canada vs. USA” theme was rampant in 1994, the Stampeders – whose roster included several American-born players – were more focused on capping another strong season.

“There wasn’t as much of the Canada/US angle that had been played out in Vancouver the year before,” says Stephen. “The Stamps felt a lot of pressure to win because it was their third consecutive year of having a record of 15-3.”

Baltimore kick returner Chris Wright got his team on the board just 2:02 into the game with an 82-yard punt return for a touchdown. Calgary responded with two field goals and the score was 7-6 after one quarter.

In second quarter, Calgary scored an early touchdown to take what turned out to be their only lead of the game. The Stallions took control from that point, scoring 30 points and holding Flutie and the Stampeders to just one score – a touchdown – for the rest of the match. Final score: Baltimore 37, Calgary 20; history was made.

As expected, seeing an American team walk off with a Canadian championship was newsworthy and embarrassing for some living north of the border. It was almost like a nightmare coming true.

“As I recall, I was absolutely horrified by the possibility that an American team could take the Grey Cup south of the border,” says Don Landry, sportscaster and contributor to Yahoo! Sports and CFL.ca. “I remember being very happy the previous year, when the Lions kept the Cup in Canada… As well, I figured there wasn’t much of a chance of the Stallions winning in ’95, what with Flutie as the centerpiece of an amazing Calgary team.”

There was a different feeling in the losing city.

“The story in Calgary was more about whether the Stamps should have inserted [backup QB] Jeff Garcia into the game,” explains Mark Stephen. “Doug Flutie, in what would be his last Stamps game, was not at the top of his game and there was considerable angst about whether he should have been pulled.

“There was no real American/Canadian sentiment, as I recall, just disappointment that they lost after another spectacular regular season.”

The Stallions were celebrating their success, but were soon on the lookout for a new home. In 1996, Art Modell, owner of the NFL’s Cleveland Browns, moved his franchise to Baltimore, where they became the Ravens.

Not willing to compete with the NFL, the Stallions chose relocation. In an ironic twist, the team ultimately settled north of the border and became the latest version of the Montreal Alouettes.

While the NFL Ravens are fully ensconced in Baltimore, there’s still a contingent of fans from the city craving three-down style football. Several of them visited Montreal when the Alouettes hosted and played in the 2008 Grey Cup.

A TSN/Canadian Press article highlighted these fans, including Leo “Flag Man” Dodge. The article noted Dodge’s shirt which read “Thanks Canada. We may never repeat but we will not forget. Fans of Baltimore.”

Though the Baltimore Stallions lived a short existence, they managed to secure their place in Grey Cup lore. Being the first and only American team to capture the CFL championship is a unique historical footnote that will never be taken away.

Sure, the Stallions’ victory in 1995 might not be the first thing CFL fans think of when recalling the Grey Cup’s 100-year history. But as Don Landry points out, it does put the city of Baltimore in a special category.

“Now, I think it’s kind of a cool piece of trivia,” says Landry.” Baltimore is the only city to have ever won both a Super Bowl and a Grey Cup.”