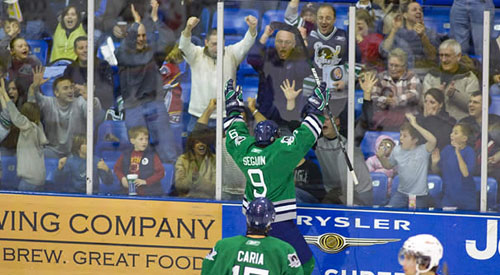 The name Tyler Seguin could be compared to that of Bigfoot, the Abominable Snowman or the Loch Ness Monster.

To many, the enigma of Seguin first appeared when the preliminary NHL Draft rankings were released and the last name that almost everyone had their own way of pronouncing was sitting atop the list above that of plenty talked about Taylor Hall.

Not many had heard of Seguin let alone seen him play or knew much of his style of play other than that he could put the puck in the net. This year Seguin has been compared to Matt Duchene who, after a solid final season with the Brampton Battalion last year, was selected third overall to the Colorado Avalanche. It’s comparison that really bodes well for Seguin considering where Duchene is at now.

Instantly after the rankings were released the Plymouth Whalers All-Star forward was being talked about everywhere and the debate of Tyler vs. Taylor began. Hall and Seguin play on two rival teams who are close geographically and are competing with one another to reach their respective dreams, so one would think their relationship is that of Ricky Bobby and Jean Girard, but everything seems to be fine.

“I actually just first met [Hall] over the Christmas break. We met at the World Junior Hockey Championship tryout,” said Seguin. “He’s a good guy, we talked a bit and made some jokes but that’s all I really know of him.”

Regardless of their relationship with each other, at the WJHC tryout the two future-NHL’ers were there with the same goal in mind; to win a gold medal.

Hall was the only one to get the chance.

In a shock to most, Seguin was sent packing in the first round of cuts.

“I don’t understand why he wasn’t on team Canada. I said, ‘They must have a pretty good team’ when they cut him. I just don’t understand,” said Don Cherry. “I know he’s young and everything but if he’s going to be number two [in the upcoming NHL-draft] you’d think they would have kept him. Evidently they should have.”

Over the course of about two months, Seguin’s life resembled the roller-coaster Drop Zone at Canada’s Wonderland more so than that of a typical 17-year-old, from being ranked as the top-pick in the National Hockey League to being cut from a tournament that is supposed to showcase the world’s top Under-20 hockey players.

Like the old adage goes, what doesn’t kill you only makes you

stronger, and that is exactly the outlook Seguin as taken ever since.

“It was definitely disappointing, but second chances do come around and if that happens again I’ll know what to expect,” said Seguin. “For [Cherry] to recognize me as a good player, that’s pretty cool. I’m just trying to put it all behind me and use it as motivation in the second half of the season and moving forward.”

The World Junior Tournament has come and gone and now Seguin’s focus has switched to his Plymouth Whalers and an OHL Championship, but it’s hard not to concentrate on draft rankings and the prospect of going first overall in the NHL draft.

“Growing up I always wanted to be the top player in my age group,” said Seguin, a 1992-born player. “Hall and [Cam] Fowler are both ’91 born players, but in the end I just want to make any NHL team and win the Stanley Cup.”

Before cracking an NHL lineup and having a shot at Lord Stanley, first comes the NHL combine; something Seguin is getting ready for.

practice,” said Seguin. “After [the CHL’s Top Prospect’s Game] and being around the top-40 players in the CHL I know my weakness and strengths better.”

Between now and the first time the slick skating super sniper straps up the blades for the first time in the NHL, it will be quite apparent that there are a lot more strengths in his game than weaknesses. Maybe then Seguin will not be linked to Nessy, Bigfoot and friends and his last name will only have one pronunciation.