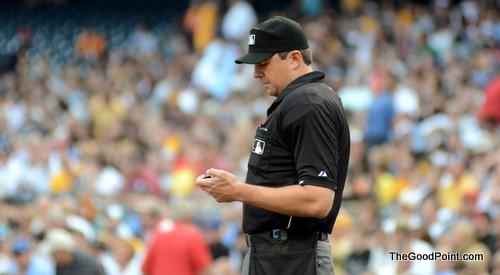 In addition to his contributions to The Good Point, Jesse Goldberg-Strassler is the full-time broadcaster of the Toronto Blue Jay-affiliate Lansing Lugnuts, of the Class A Midwest League.

It is half an hour before first pitch, squarely situated amid the dog days of summer.

Carlos Martinez, in his mid-20s from Puerto Rico, is doing well-practiced elevated pushups, his feet up on a chair. Not far away, John Silva stretches out with elastic workout bands. Both have already showered up in preparation for the game.

When they dress, they do not suit up in spikes, stirrups and jerseys. Instead, they put on formal grays and blacks, preparing for another evening playing the part of the most despised men on the field.

Only the most forgiving of mothers could love an umpire.

Silva is easy-going, Martinez much more intense. Each takes his craft seriously, studying video with the same eye toward improvement as the most motivated hitter in each clubhouse. They take turns driving from city to city, living perpetually out of their suitcases.

I ask them if the use of instant replay should be expanded in the Majors.

They agree on the same answer: Instant replay is a fine idea with unforeseen complications. Take a ground ball down the line with runners on base, offers Silva. If the original call was foul but replay showed the ball was fair, where should the runners be placed? It’s a purely judgmental call and one over which arguments would erupt between the umpire and each manager.

As someone who favors instant replay thoroughly, I concede that this is a rational argument that I had not previously considered.

I have spoken with quite a few umpires over the years and have, without exception, enjoyed their company. In 2005, while working for the Brockton Rox, I proposed holding “Umpire Appreciation Day”, encouraging everyone to thank their friendly neighborhood umpires for their time and effort. I’m still convinced that it’s a novel idea that could work to great effect on the right day. Bring out their family members for the first pitches, have the home plate umpire signal a couple of overly dramatic strikes to resounding approval. Applaud the routine “out” call on a groundout to short. Offer a standing ovation for a quality dusting of home plate. Teach fans how to personally rub up new baseballs with Lena Blackburne Baseball Rubbing Mud. The possibilities are endless!

Really, though, it’s a terrible idea. It’s impossible to appreciate umpires. No matter how much I may enjoy an umpire’s company before the game, I invariably join my compatriots each night in the dugouts, bullpens, broadcast booths, box seats, bleacher seats and suites, and find cause for disagreement with an umpire’s decisions throughout the course of the next nine innings.

As a broadcaster, I’m able to air my grievances different than most. My style on air is slightly clever: I see a call I find dubious and I laugh, or else drop a code word or phrase to signal my disagreement to my listeners. “Generous”, for example, or “interesting” or “debatable” or “Well, he’s closer to the play than I am”.

The thoughtful Carlos Martinez brings up the umpire’s central lament: considering how many calls an umpire is asked to make over the course of the game, a missed call here or there is given extra weight while dozens of accurate calls are overlooked.

(I suspect – and hope – that an umpire who makes more incorrect calls than correct calls either puts in the effort and dedicates himself/herself to improving or finds a new line of work, stat.)

But I have two reactions to the umpire’s lament, both of which I think everyone on Earth except umpires would agree with.

The first reaction goes back to a brilliant Chris Rock standup routine based around people wanting credit for things they’re supposed to do. “I take care of my kids,” Rock imitates a man saying proudly, before he snaps back, “You’re supposed to! What do you want, a cookie?”

Similarly, hey, an umpire wants credit for calling a strike a strike? If it’s in the strike zone, he’s supposed to call it a strike. It’s only when he doesn’t call it a strike that folks start getting their ire up. No cookies for strikes called correctly.

The second reaction is sabermetrics. Baseball is a numbers game, currently to a mind-numbing level. There are people keeping track of the percentage of curves Tim Lincecum throws in the dirt in 1-2 counts while pitching at home with a lead, for crying out loud. (That may not entirely be accurate, but I dare say it’s frighteningly close to the truth.)

What if we extended our statistical obsession to umpires? They want us to applaud their correct calls? Show me who’s the league leader in calling bang-bang plays at first base and I’ll be right there cheering for him when he nails another close call, corroborated by television slow-motion replay. Heck, it might even earn the ump in question an assignment at first for Game 1 of the World Series and no one would doubt him one bit.

Umpires wouldn’t agree to it, not when we’d all discover who’s the worst at determining fair/foul and who has the most inconsistent strike zone. Then again, we emblazon players’ stats openly, some times 20 feet high on the video board for all to see. If Jon Rauch is scuffling, we know about it and discuss it openly. Get rid of Rauch, the clamor arises. Bring up a kid who knows how to pitch!

Why couldn’t the same thing happen with umpires? If Cowboy Joe West is in a slump, bring up a fresh face who’s tearing up the International League with his poise and consistent strike zone.

The media would love it. The media loves human interest stories. A kid umpire called up from Columbus for the big Indians/Tigers series would garner major attention.

The fans would love it. Fans love reasons to relate to the men on the field in front of them. After Armando Galarraga’s near-perfect game, Jim Joyce received a growing outpouring of support and respect as fans learned about what sort of person he was.

Major League umpires, however, would never go along with it. Never.

But the Minor League umps, the men like Carlos Martinez and John Silva grinding their way as best they can, traveling from stadium to stadium full of angry onlookers questioning their eyesight and integrity, doing their best to deliver accurate judgments with half of the staff of a Major League umpiring crew, studying their game tapes, getting paid peanuts for their long hours and labor?

I wonder what their call would be.