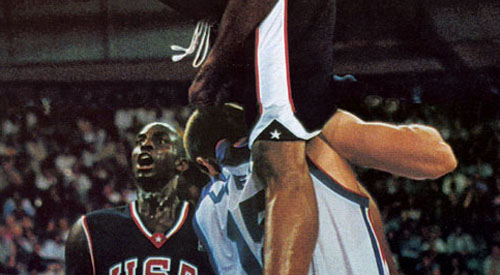 It was the year 2000. The location was Sydney, Australia. Gold was the prize. The story of these Olympics Games is different than most however. It doesnt revolve around medal counts, world records or national supremacy. The story of these games follows two basketball players.

The first player was a last minute addition to an American team not yet concerned with redemption. An American team that was undefeated in international play since The Dream Team was born eight years earlier. A team on which, despite his up and coming popularity, this player was an afterthought.

The second player was an up and comer in his own right. Though not as internationally recognized as the first, he was also there to compete for the gold with the French national team. A NBA first round selection himself, this player had high hopes for his career, high hopes for his future.

The French media referred to what followed as “le dunk de la mort”. Translation: the dunk of death. The first player took one dribble and elevated, elevated over another player, another player that was eight inches taller than he was, a player that was 7’2″, he elevated over the second player. Pandemonium ensued. Players left their benches, fans jumped from their seats, announcers were left speechless. This one brief moment overshadowed the remainder of the game, the remainder of the tournament. It overshadowed the Olympics.

The two players met again in the gold medal game. One basking in the memory of what occurred, the other trying to forget it ever happened and hoping the world could do the same. He avoided the spotlight, avoided eye contact and avoided the first player at all costs.

The dunk of death lived up to its name. It elevated the first player from an afterthought to an icon, and it effectively marked the demise of the seconds career. Still, to this day, it is considered a virtual consensus for the greatest dunk of all time.

France hasnt competed in the Olympics since, and the second player remains in Europe, still avoiding the spotlight. No one has forgotten. No one ever will.