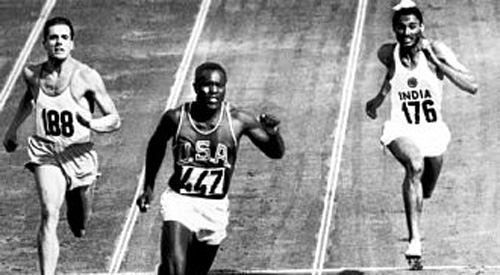 A few years ago, Will Leitch blasted the Olympics in New York Magazine. He said that he wasn’t “sure I consider any of it sports,” adding that the Olympics are for people who follow reality TV, not real fans (like the otherwise reasonable Leitch is). With the summer Olympics coming up in a few months time, I’ve been thinking about what he wrote: what is it about the Olympics that attracts so people to sports they couldn’t care less about?

Certainly there’s the pomp and pageantry. But another p-word comes to mind: patriotism. Nothing else in sport, not even the hyper-patriotism proceeding NFL games, brings out the inner jingoist quite like the Olympics does. Almost everyone I knew watched Canada win the hockey gold medal in 2010, including many people who couldn’t care less about the NHL.

Remember there was a time when the Olympics mattered on a political scale. A good case can be made that this was where the Cold War powers fought their battles: the U.S. team’s upset of the Russians at ice hockey in 1980, controversial Soviet basketball gold in 1972.  In 1960, the athletes toughed it out on the track.

In “Rome 1960: The Olympics That Changed the World,” David Maraniss catches the feeling of those particular Summer Olympics, from the rising personalities, the changing world, the backroom politics coming from the Soviets and Americans meeting during a particularly nasty era of the Cold War. These Olympics ranged from the tragic (the death of a Norwegian cyclist mid-event) to the triumphant (the gold medal dominance and international coming-out party of Muhammad Ali). But the center of this book is one of the United State’s most underrated and overlooked athletes of all time: decathlete Rafer Johnson.

The decathlon is one of the toughest, most punishing events in all of sports. Ten competitions, each one a mini-Olympic event, all run within two full days. In 1960, Johnson was arguably the best athlete training in America, just eking out ahead of Taiwan’s CK Yang, Johnson’s training partner at UCLA and a close friend. The Soviet entry, Vasili Kuznetsov, wasn’t to be overlooked either: he nearly topped Johnson at a pre-Olympic meet in Moscow.

As Maraniss explains, when Yang and Johnson battled for gold, the event held political overtones. A gold medal would help Taiwan emerge from the shadow of Mao’s Red China on the international stage but a Johnson win would help America deflect criticism from its racial troubles. By explaining these implications, Maraniss sets the stage for their dramatic finale and skillfully ratchets up the tension.

But the decathlon is hardly the only compelling story here. He writes of Abebe Bikila running the marathon barefoot, easily winning and shattering the Olympic record; the Men’s Basketball team with a backcourt of Oscar Robertson and Jerry West, dominating the field; sprinter Wilma Rudolph, who overcame a childhood polio infection, racism and poverty and won three gold medals and became an international sensation in these games.

However, at times, he does seem a little too focused on the American side of things, especially in the events the Americans dominated. We learn little, for instance, of the teams the Men’s Basketball team played against. While the interplay between the two superpowers makes for a good storyline, it can feel a little forced. Sometimes you wonder if any other countries bothered to send athletes.

Still, this is mostly a full portrait of the games and especially of Avery Brundage, then head of the International Olympic Committee. While it covers the glory and spectacle of the games, Maraniss is never shy to report on a more unsettling side, such as the IOC’s blind eye to apartheid in South Africa, Brundrage’s casual anti-Semitism, the IOC’s refusal to take sides in the Cold War: allowing the Eastern Bloc to claim every athlete as an amateur or forcing Taiwan to compete under the name Formosa.

“Rome 1960” is a well-researched and well-written account of the games, especially in how it can place them in their context: this was before TV really took hold of the games, before tragedy in Munich and a miracle in Lake Placid. In some ways, these games have been overshadowed by what they helped foster and the personalities that came out of them, Muhammad Ali chief among them, but hardly alone.

Whatever its flaws in focus, “Rome 1960” is a great way to gear up for this summer’s games and a fun read to boot. You might even find a new appreciation for some of the sports you, as a real fan, can only pretend to care about.